Aoji is the second stage boss of Evanescent Existence and Brilliant Pagoda or Haze Castle, the first and fourth game of the Len'en Project respectively. They are also a playable character in the latter game.

Aoji is shown as being gentle at heart, but also rather shy and withdrawn. They're friendly and respectful towards everyone, but they don't have a very proactive personality. As of Brilliant Pagoda or Haze Castle, they've become somewhat bolder - for example, taking after Kuroji and their money-making schemes, they're willing to extort money from the Preschool Team.[1]

Aoji already had various magical abilities before being spirited away to Mugenri.[2], but awakened to the ability to create whirlpools via the Curtain of Awakening and to shoot bullets without danmaku weapons after entering Mugenri.[3]

Aoji can create whirlpools out of liquids, gases and even solids should the need arise.

Aoji is also capable of summoning various beasts. This could potentially be tied to some of their spell cards (such as "Leviathan"), but whether those actually invoke another being's power or are just simply themed after them is unknown. Summoned animals like Aoji because of their tasty soul.[3]

Their full name is Aoji Shitodo (鵐 蒿雀). Their given name Aoji (蒿雀) is a possible rendering of the Japanese word for the black-faced bunting, a kind of bird, in which Ao (蒿) is used to mean "blue/green", fitting their appearance and affinity for water. However, the kanji itself actually refers to the mugwort plant, as it refers to yomogi-iro (蓬色), "the colour of mugwort", the same colour the black-faced bunting is. Their family name Shitodo (鵐) is an archaic way to refer to meadow buntings in general.

There's a running gag where nobody seems to remember their name, save for Kuroji. Yabusame Houlen calls them Aoi (あおい) and Hooaka Shitodo calls them Aoki (あおき). They were even called Aon (あおん) and Aoni (あおに) by Tom C. Zemlja and NiLU respectively. Apparently this is an actual phenomenon, where even people like NiLU who knows how to pronounce Aoji's name will mispronounce it if not cafeful.[4]

They have short wavy green hair and green eyes. They wear the characteristic Shitodo outfit: a black necktie and puffy shorts with a long, hooded, blue jacket. Their hood has a glowing triskelion in the front, which is significantly more visible in Aoji's Brilliant Pagoda or Haze Castle appearance.

Like everyone else, Aoji and their siblings are spirited away to Mugenri and end up at the Spacetime Whirpool.

While trapped in the whirlpool, they run into Tsurubami Senri disguised as Tsubakura Enraku. At first glance, they realize that Aoji is weak and is disappointed. Out of frustration, they ask Aoji to attack them, much to Aoji's confusion. After Aoji is defeated, the fake Tsubakura explains that whoever makes it to the goal first gets to leave this place.

After being defeated by Tsubakura, they run into Yabusame Houlen who messes up Aoji's name, even after being corrected. Aoji apologizes for having a tough name to remember and asks if Yabusame was spirited away as well. They then remember that everyone has been convinced that if they defeat Yabusame, they'll find a way to escape and get a prize. Reluctantly, they attack Yabusame, only to be defeated again. After that, Aoji gives Tsubakura's location. Eventually the Shitodo siblings reunite and set up in Mugenri.

Aoji, along with Hooaka Shitodo, are only mentioned in the prologue. Apparently, the Shitodo siblings are having problems adjusting to Mugenri. Aoji, because of their shy personality, doesn't do anything and was expecting Kuroji to do all the work, much to the latter's chagrin. In order to advertise their family and have some funds, Kuroji decides to resolve the incident. 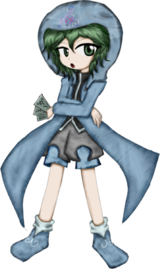 In all routes, Aoji and their siblings deal with a few youkai and some of their human aquitances, trying to steal valuable things in the process (such as the Harujion or Yaorochi's Tasouken). At the end of the Brilliant Pagoda or Haze Castle routes, Aoji and their siblings find out about the war sides and the motives of the Imperial Military and the Dragonfly Army, but Kuroji decides to stay out of it, stating that they only care about their own wellbeing doesn't care about what happens to Mugenri, while Aoji and Hooaka express their interest to return to the Outside World. In the end, they meet Suzumi again, forcing the Shitodo siblings to remember they were attacked by Suzumi earlier that day. Suzumi reveals their intention to make Tsubakura's life a living hell and after a hard fight, Suzumi erases their memories again (with Aoji being the only one who vaguely remembers).

Being the youngest of the siblings, Aoji is often left with menial tasks and chores by Hooaka and Kuroji. Being the weakest as well, Aoji occasionally feels insecure about whether they are a burden to their older siblings.[5]