This page lists other documentation in regards to Brilliant Pagoda or Haze Castle. 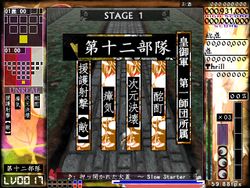 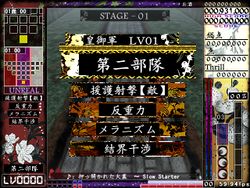 The trial version of Brilliant Pagoda or Haze Castle has three stages that have some noticeable differences compared to the final version (i.e. v1.01). Some general differences include:

Apart from the fifth team being implemented, there were also some significant changes to the game between the full version (v1.10) and v1.20. 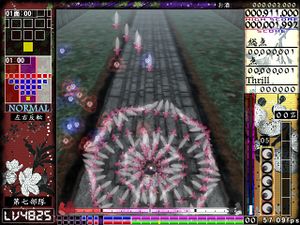 On 23 March 2017 with v1.01a, YouTuber Two Eyed Mike discovered a supportively unused shot-type covered in the unknown secret team.[1] This data existed in the three slots with the three unselectable "?" characters on the character select screen, and are all identical. Due to the mechanics of the shot-type, it was largely theorised to be Suzumi Kuzu amongst the fanbase, later revealed to be true in v1.20a.

One can access and play with this shot-type by hacking the game with Cheat Engine. This will scan for the value of the currently highlighted character (highest being the decimal 11 or hex 0B, which is Aoji Shitodo), and after, the player can change this value to the decimal 12, 13 or 14 (in hex 0C, 0D, or 0E respectively). Afterwards, the player can play as what appeared to be an unused playable version of Suzumi.

The shot-type highly resembles that of Suzumi's official shot-type of v1.20a onwards (See Gameplay § Characters). The main difference is that their bomb covers the screen with static. The player character has no sprites and can only be seen by focusing to make the hitbox visible. Since there isn't any valid dialogue files associated with the secret team, getting hit or starting a boss fight will cause error messages to appear in the top left corner, and music transitions will not occur when fighting bosses. Copying some existing dialogue and renaming them (e.g. talk_Humikado_Aoji_0.txt to talk__Aoji_0.txt) will fix some of the error messages.[2]

There are four "defeated" portraits of Suzumi unused in the data folders. These were originally used in the demo version, as there were dialogue after their defeat on stage 3:0. Since Suzumi was moved to being a final boss in the final game on stage 6:0, the portraits had no use.