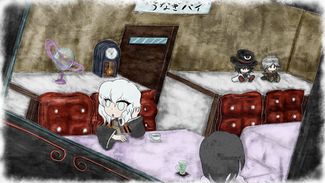 The Wings of Magritte is described to be an "interdimensional transcending limited express train".[1] The video it featured in showed two passengers on the train, Haru and Hoojiro Shitodo, which seemed to be travelling in outer space. At the time, both had unknown names, and it wasn't made clear whether they had relevance to the Len'en Project.

The Wings of Magritte first appeared in the video Critical Point Bidding its Last Farewell, the main focus of which was the musical theme of the train. The video shows Haru and Hoojiro Shitodo on what seems to be the train itself, doing various things like playing instruments or drinking tea. At the end of the video, they're shown walking along the train's tracks, facing away from the viewer. An interesting point to note is that the view outside the train seems to show outer space, with many celestial bodies like stars, planets, black holes and even an hourglass. In the video description, JynX says that the drawings are just scribbles and that there's no need to pay attention to them.

On 14 October 2016, JynX uploaded two coloured drawings of Haru and Hoojiro Shitodo on The Wings of Magritte to their Twitter. One shows them in what seems to be a dining carriage with stuffed toy versions of Yabusame Houlen and Tsubakura Enraku on one of the tables, and a banner above the door which reads "Eel Pie".

The other shows the two characters in their rooms on the train, with the view outside shown. Hoojiro seems to be writing something with an ink brush, while Haru is eating a cake and is now looking outside the window. Interestingly, there is a giant scroll in the sky, titled "Ketchup", most of the scroll is unreadable, but the words "style" in English and "crab stick" in Japanese can be read. The ground shows train tracks with torii built on top. While it's unclear where the train is heading towards, the torii would imply a shrine of sorts.

The train is mentioned by Rei, who mentions that they were made aware of Haru and Hoojiro's actions through a backup of the Magritte's data.

The album's short stories, written from Hoojiro's and Haru's perspectives, may have taken place on the Magritte, showing the two's interactions. The train itself isn't described in much detail, besides having a lounge car and a food-dispensing machine.