Hooaka Shitodo (鵐 頬赤, Shitodo Hooaka) is the middle sibling of the Shitodo siblings, the others being Aoji Shitodo and Kuroji Shitodo. They have a carefree and eccentric personality. They are the fourth stage boss of Evanescent Existence, the first game of the Len'en Project, later returning as a playable character in Brilliant Pagoda or Haze Castle.

Hooaka is a carefree person, whose personality changes depending on the mood of the situation. They are so carefree that they don't care much about Kuroji's amoral methods to gain money or bothering to remember Aoji's name.

According to Kuroji, they aren't very smart, but they are still a powerful magician, enough to be called the "Air Master" (エア・マスター, Ea Masuta), which is also their musical theme. According to JynX, they're called this due to having a reputation for being able to understand the mood in the air.

Hooaka is a magician and can control certain elements, but apparently their strong point is heat magic. As shown in their spell cards, they can control hot and cold, resulting in steam and gas. They invoke certain kinds of magic by harnessing the mood of the situation, but with magic outside of that range, they can't read the mood and thus can't cast the spells.

Once Hooaka has sufficiently blended in with the world they are in, they are capable of spreading red and blue wings on their back. While it remains unclear what exact purpose they serve, they appear to allow them to use more of their power, with Hooaka saying that "they mean I'm fighting a little bit seriously".[1]

According to Hamee, Hooaka has two spirits and the strength of two people in one body, but what this means is unknown.

They have short wavy red hair and red eyes. They wear the characteristic Shitodo outfit: a black necktie with puffy shorts and a long, hooded, green jacket.
In their Brilliant Pagoda or Haze Castle appearance, their right arm, which had been cut off, is always hidden out of view and there are red and blue wings behind them, symbolising heat and cold respectively.

Like everyone else, Hooaka and their siblings are spirited away to Mugenri and ends up in a forest.

After being defeated by Tsubakura, they run into Yabusame. They tell Yabusame that Tsubakura beat their little sibling Aoji Shitodo and some other people on the way to Mugenri. Without much left to do, the two fight and Hooaka is defeated again. Eventually the Shitodo siblings reunite and set up in Mugenri.

Hooaka, along with Aoji Shitodo are only mentioned in the prologue. Apparently, the Shitodo siblings have problems adjusting to Mugenri and Hooaka, because of their lazy personality, doesn't do anything, much to Kuroji's chagrin. In order to advertise their family and have some funds, Kuroji decides to resolve the incident. 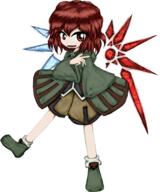 In all routes, Hooaka and their siblings deal with a few youkai and some of their human acquaintances, trying to steal valuable things in the process (such as the Harujion or Yaorochi's Tasouken). At the end of the Brilliant Pagoda or Haze Castle routes, Hooaka and their siblings find out about the war sides and the motives of the Imperial Military and the Dragonfly Army, but Kuroji decides to stay out of it, stating that they only care about their own wellbeing doesn't care about what happens to Mugenri, while Aoji and Hooaka express their interest to return to the Outside World. In the end, they meet Suzumi again, forcing the Shitodo siblings to remember they were attacked by Suzumi earlier that day. Suzumi reveals their intention to make Tsubakura's life a living hell and after a hard fight, Suzumi erases their memories again (with Aoji being the only one who vaguely remembers).