Taira no Fumikado (平 文門) is a homunculus that aims to become the "True Emperor" of Mugenri. They used to be human, but they transferred their soul onto a homuncular oni.

Fumikado is the stage 5 boss of Reactivate Majestical Imperial and later became a playable character in Brilliant Pagoda or Haze Castle, as well as a possible stage 5 boss.

Fumikado was born in a noble family from the Capital City, but they were orphaned after their parents were murdered on a political power dispute. They were raised by their single grandfather Taira no Iwakado and used to work as a spirit medium. Said grandfather was an alchemist who wished to resurrect the "True Emperor", Taira no Masakado. He used a body from an oni that he hunted with Fumikado's blood, adding the vital energy and some special qualities from a lot of other living things to manufacture a new life-form. Grateful for taking care of them, Fumikado agreed to transfer their soul to the homunculus so stimulate its growth. When the body was completed as a "vessel", their grandfather had already passed away.

They continued his plan with their fellows and vowed to realize it on their grandfather's tomb. They continued to work on the "vessel" planning to improve its physical and spiritual strength, relying on the force of the Taira clan's Saeda flute that had the power to command spirits. Fumikado's servant, Taira no Chouki, offered to sacrifice their life in order to become a spirit and help Fumikado to control the flute. However, Chouki's death was a senseless sacrifice, since as a spirit, they couldn't play the flute. Meanwhile, Fumikado escaped from Capital, as they were pursued by assassins.

There, they decided to cross the Gloomy Straits when they met the boater Fujiwara no Iyozane. The latter tried to break the ice and make conversation by telling about their story, which concluded with Iyozane playing the flute for them. After that, they learned each other's names and realized that they belonged to enemy families, but at that point, it didn't matter anymore. Fumikado explained that soon a big hole will open in the internal side of the Mugenri Barrier, and lots of spirits will enter the barrier. They decided to work together, Fumikado giving them a replica of the Saeda flute made by Sukune Katano so Iyozane could be able to control the spirits and guide them.

Fumikado comes as a haughty yet dignified person who has the ambition to become an emperor and rule Mugenri. Their lackeys, Fujiwara no Iyozane and Tsugumi Umatachi, spend much of their time complying with Fumikado's whims, but they treat them with respect. Despite their haughty and condescending personality, they acknowledge if someone has more power than their own or when someone is being noble. As shown in Brilliant Pagoda or Haze Castle, they dislike being involved in secular affairs and mostly leave all the work to their lackeys. The only reason why they are so obsessed with ruling and becoming an emperor is because of their promise to their beloved grandfather.

They have the power to transfer spirits to anything and everything, but they mostly use that power on themself. It was last used to transfer their own soul into Para's body, and Para's into their original, human body.

Taira no Masakado was a samurai of the Heian period who led a rebellion against the central government of Kyoto and was said to be favoured by Myōken. His childhood name was Sōma no Kojirō (相馬 小次郎) and his daughter continued living within the lands of the Sōma clan even after her father's death. This would explain Fumikado's connections to the Sōma clan, such as the use of the clan's Kuyo (九曜) emblem in spell backgrounds. In addition, Fumikado's position as a descendent of Masakado means that they are a descendent of the Chiba clan as well, as the Sōma clan descended from them. The Chiba clan is famous for their Tsuki ni Hoshi (月に星) emblem, which translates to "Moon and Star". According to JynX, this is why Fumikado is sometimes referred to as the "Moon Child", as seen in their music themes.[2]

Moonchild is also the name of a novel by famed occultist Aleister Crowley, about the creation of a homunculus-like being through alchemy. It is unknown if this is coincidental or if JynX is aware of this parallel.

Taira no Atsumori was a samurai famous for his death in single combat at the Battle of Ichi-no-Tani. He is notable as he was the original owner of the "Saeda" (小枝 さえだ) flute, also known as the "Aoba" (青葉 あおば), and was said to be an excellent flute player. This would explain why the Saeda was in Fumikado's possession.

Taira no Yoshifumi was Masakado's uncle, while a comparatively less notable Taira in Masakado's rebellion, he was granted sovereign over Masakado's territory of the Sōma Province after Masakado was killed. While the details of the story vary, it is said that he was favoured by Myōken after Masakado became too arrogant. The fact that both Masakado and Yoshifumi have been in Myōken's favour might explain the references to Myōken and Buddhism in Fumikado's spell cards. Being a god related to war, Myōken is also occasionally worshipped as a god of iron making and blacksmithing, which may explain Fumikado's relationship with Yago Ametsukana.

Their full name is Taira no Fumikado (平 文門), their given name being a combination of Yoshifumi and Masakado. The hiragana character no (の) used here indicates a "belonging", thus the English equivalent of their name would be "Fumikado of the Taira". In ancient Japan times, it was common for aristocrats with a clan's name to have no between their clan's name and first name. Fumikado's first name contains a play on the word mikado (御門 みかど), which means emperor.[3] It is thus possible that Fumikado (文門, ふみかど) is a pun on the word 不御門 (ふみかど), which means "not Emperor".

They have long green hair that reaches past their waist. They wear a brown hairband on their head, geta shoes, a red top tank with a blue hakama skirt. The red portion of their headband is roughly over their temple, the one place Masakado is said to have been vulnerable, according to the "Iron Body Legend". They have red eyes, pointy ears and fangs, because the homunculus to which they transferred their soul is a homuncular oni. 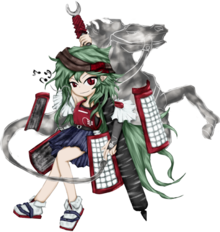 Fumikado decides to take advantage of the abundance of spirits for their ceremony, when they plan to revive the soul of Taira no Masakado and transfer his soul to their body. They ally with Iyozane (since they were able to use the Saeda flute) and Tsugumi Umatachi, hired by Iyozane. They're tasked with using their powers to herd the spirits and guide them to where Fumikado is making their resurrection ceremony. Unfortunately for their plans, Tsugumi and Iyozane are defeated by the heroes and the latter confesses about Fumikado's plans. The heroes go to the resurrection ceremony in order to stop Fumikado, who is upset that their lackeys have failed their mission and that there are no spirits. After their defeat at the hands of the heroes, Fumikado reveals that their plan didn't work because, despite the power of the flute, the spirits are being attracted to another location, which happens to be the Withered Grove, where the Harujion is.

Even though their plan failed, Fumikado is still friendly and cordial to the heroes and even visits the shrine to explain that they were not involved in the sudden affluent of spirits. 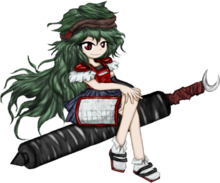 Despite their fall from grace, Fumikado plans to take over Mugenri and together with Iyozane and Tsugumi, they go to resolve the incident. They find out that they are a wanted criminal in the Capital City and their main supporters, the Dragonfly Army, have turned against them because they didn't complete the ritual in the previous game.

Iyozane is their ally, but originally were the enemy of each other's family. They hope to become a famous and influential person if they ally with Fumikado.

One of Fumikado's lackeys. Tsugumi is unable to understand their master's ambitions but obeys them in hopes of one day earning their promised payment.

Chouki was raised by Fumikado's grandfather to become Fumik‎ado's servant. They were good friends and Chouki assisted with the plan to resurrect Masakado, but they needed to control the Saeda of the Tairas. Chouki made a deal with a god who controlled the dead, in order to have a body "in the verge of life and death". However, their sacrifice was in vain, since as a dead body, Chouki was unable to play the Saeda. Fumikado decided to dismiss Chouki afterwards (possibly out of concern for them), but Chouki felt betrayed that they had been discarded by Fumikado and started to despise them, becoming an evil spirit.

Fumikado does feel guilt about Chouki's fate and is devastated to see that they became their enemy and rival for the title of the emperor. When Chouki expresses their desire to kill and get revenge on Fumikado, they say that they don't mind being killed by them.

Garaiya once trained Fumikado as preparation for their rise to the position of True Emperor, along with Chouki. However, Fumikado's failure to revive Taira no Masakado during the events of Reactivate Majestical Imperial, along with the Dragonfly Castle's revelation to Chouki had caused Garaiya to lose faith and stop supporting Fumikado.

Yago had long been a patron of the Taira clan and was particularly close to Iwakado. Prior to his passing, Yago promised him to make sure Fumikado grows up into a fine and capable ruler. Yago appears to heavily honor this promise and is willing to make sure it's fulfiled no matter what, offering to let Fumikado become their puppet so as to ensure they can become the New Emperor. Despite Fumikado's refusal, they respect their choice and offers them advice instead. Fumikado's spiked iron club, a weapon commonly used by the oni in Japanese mythology, was also made by Yago Ametsukana.[4]