Prior to working with Iyozane and Fumikado, Tsugumi used to be a researcher who worked on breeding vegetables. One day, Tsugumi came across the fliers that Iyozane had been posting around the Human Village and, thinking that Iyozane was going to be their boss, applied for the position.

Tsugumi is a very responsible youkai that uses coarse language, appearing to be a foil to Iyozane's airheaded, jovial nature. They speak in a heavy Kansai dialect. Though they have a quick temper and their attitude is rough, they are actually a very humble person and value hard work.

It is not entirely clear what species Tsugumi belongs to, but they are most likely not human. As suggested in Brilliant Pagoda or Haze Castle, where Mitsumo calls the New Emperor Team "a pack of inhuman beings", which Fumikado denies for Iyozane but not themself nor Tsugumi.[1] They are listed as an "eggplant jockey" (お歳暮ジョッキー, oseibou jokkii) and a "harvest festival jockey" (収穫祭ジョッキー, shuukakusai jokkii) respectively in their Reactivate Majestical Imperial and Brilliant Pagoda or Haze Castle official profiles, both referencing the plant Tsugumi rode in the game along with their role as the "jockey" to their mounts.

In Reactivate Majestical Imperial, the term "Oseibo" (お歳暮, oseibou) is used in relation to the eggplant. Oseibo refers to both the traditional Japanese end-of-year gift-giving practice to show one's gratitude, as well as the gifts themselves. It is one of two such practices in Japan, the other being "Ochugen" (お中元, ochuugen), which takes place in the middle of each year and is often integrated into Obon festival practises. However, eggplants are not typical gifts for either Oseibo or Ochugen. Instead, the eggplant association comes from the Obon festival custom of crafting shouryou-uma (精霊馬, lit. "spirit horse"), which represent animals for the souls of departed relatives to ride on. Typically, a cucumber is used to make a horse for a swift return home from Hell, while an eggplant is used to make a cow for slow trip back.

In Brilliant Pagoda or Haze Castle, the term "Harvest Festival" is used in relation to the pumpkin. Harvest festivals commonly take place around Autumn, which are when pumpkins are ready for harvest.

Riding on anything at all

Tsugumi has the ability to turn anything they sit on into a vehicle. In Reactivate Majestical Imperial they sit on an obon eggplant, and in Brilliant Pagoda or Haze Castle, they sit on a propelled pumpkin. According to JynX, they tried to use their ability to transform it into a pumpkin carriage, Cinderella-style. But for some reason, it transformed into a rocket-propelled pumpkin instead. However, they are unable to ride anything that is beyond the scope of their own powers, such as objects that are too large or too powerful.[2]

Tsugumi appears to be a homage to Johnny Joestar due to similar personalities as well as clothing design. However, when asked about this comparison, JynX claimed that it was unintentional, and that designing Tsugumi with horse jockeys would lead to such a comparison.[3]

According to JynX, "Tsugumi" is written as "噤美" in Chinese[4]. 噤 means "to shut one's mouth and keep silent" or "to have one's teeth chatter from shivering", while 美 means "beauty", "beautiful", "delicious", "to beautify" or "to praise". While 噤美 is not a standard vocabulary, it may mean "silent beauty".

Tsugumi has short blond hair and yellow eyes. They wear a strange jockey hat with goggles on it. They have black feathered wings on their back. The eggplant that Tsugumi rides on is part of an Obon tradition, in which one decorates eggplants and cucumbers to resemble cows and horses. The makeshift steeds are meant to symbolize the spirits of one's ancestors riding into the afterlife. 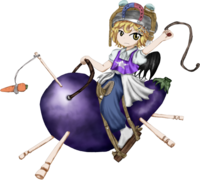 Tsugumi was hired to herd the spirits by Fujiwara no Iyozane, in order to use them to resurrect Taira no Masakado. On the way to the Gloomy Straits, they run into the heroes who proceed to make fun of their appearance. Offended, they attack the heroes, but they are defeated.

While Yabusame and Tsubakura are flying across the river, they’re ambushed by Tsugumi, who orders them to go home since they’re interrupting their job to collect the spirits. Yabusame is hungry and wants to eat the big eggplant Tsugumi is riding. In order to protect their vehicle, Tsugumi attacks them, but is defeated.

Like in the previous scenario, Tsugumi asks the heroes to go home, since their presence disrupts the spirits. Sukune asks if they are the mastermind, but Yaorochi notices that Tsugumi is just a mook. Offended and wanting to finish their job already, Tsugumi attacks them, but is defeated.

Tsugumi encounters Kuroji and Saragimaru, who proceed to make fun of the eggplant they are riding. Kuroji comments that such a big eggplant would be very valuable and proceeds to fight Tsugumi in order to get it. After the fight, Kuroji loses interest and flies away. 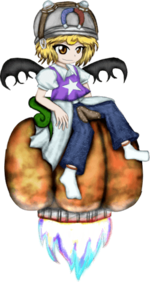 Tsugumi in BPoHC as a player

Tsugumi becomes a playable character in Brilliant Pagoda or Haze Castle and teams up with Fujiwara no Iyozane and Taira no Fumikado. Having been promised a reward by a desperate Iyozane (who is starting to regret allying with Fumikado), Tsugumi tags along with their group. They may also appear as a possible stage 2 boss on the neutral route.

In addition to being Fujiwara no Iyozane's supervisor/partner, they're also their friend whom they sometimes bicker with. They both have trouble understanding Fumikado's ambitions, but obey them nonetheless.

Tsugumi only serves Fumikado because they were hired by them to do so. The two have been depicted having snark conversations and while normally Fumikado doesn't tolerate insults or sarcastic comments at their persona, they normally tolerate Tsugumi. It's implied that unlike Iyozane, who serves Fumikado out of ambition, Tsugumi serves them out of business.

Tsugumi claims that Hibaru once left them for dead long ago, and seems to harbour a grudge towards Hibaru for this.

Notably, both Xeno a and Suzumi Kuzu have noted that Tsugumi had once "meddled with Tsurubami's affairs" in the past, implying that there is some sort of vitriolic relationship between Tsugumi and Tsurubami.[5]
While Tsugumi's relationship with Tenkai was not elaborated upon, they are shown to harbour a grudge towards Tenkai and it is likely that they knew each other from the same event.
Tsugumi also seems to have some sort of aversion to the Senri Shrine itself, preferring to stay away from it[6] and declaring their desire to beat Yabusame and Tsubakura after learning that they were the new priests, despite not having any personal grudge with them.[7]

While it is unclear how they relate to Tsugumi, it is shown that Tsugumi at least knows of them.