Fujiwara no Iyozane (藤原 伊代真, Fujiwara no Iyozane) was the true throne successor to the Capital City, but after being killed by Ooama no Ake no Mitori and later brought back to life by an unknown source, they fell from grace and now work as a humble boater. Currently, they are working with Taira no Fumikado with their goals to become emperor, in the hopes that they will become an influential person again.

Iyozane was the first successor to the throne for the emperor in the Capital City. They were close with their relative Fujiwara no Mitori and their friend Kunimitsu Ooya. However, they were unhappy with their "gilded cage" lifestyle, so Mitori decided to mercy-kill Iyozane by poisoning. Mitori gave them a state funeral in secret[1], but after they were revived through unknown means, Iyozane decided to start over as a normal person by doing menial jobs, such as carrying baggage and letters and working as a boater.

When Taira no Fumikado escaped from the Capital City in order to escape from assassins, they decided to cross the Gloomy Straits when they met the boater Iyozane. The latter tried to break the ice and make conversation by telling about their own story, which concluded with Iyozane playing the flute for Fumikado. After that, they learned each other's names and realized that they belonged to enemy families, but at that point it didn't matter any more. Fumikado explained that soon, a big hole will open in the internal side of the Mugenri Barrier, and lots of spirits will enter the barrier. They decided to work together, with Fumikado giving Iyozane a replica of a youkai tool, the "Saeda" flute once carried by Taira no Atsumori, so Iyozane could be able to control and guide the spirits to them.

Laid-back, straightforward and gentle, Iyozane is never comfortable with whatever they are doing. Though they're a good person, Iyozane is also bad at lying and keeping secrets (except for the truth about them being successor to the throne). Perhaps due to being part of the royal family once, Iyozane is ambitious and wants to become an influential person again, but with the freedom to do what they want this time. After their death and resurrection, Iyozane wished to become a pirate, but upon meeting Fumikado, they wanted to become their chief advisor.

Their ability to manipulate waves is convenient when they want to move their boat around the straits. The true extent of this power is unclear.

Manipulation of spirits through the Saeda

Iyozane received the flute "Saeda" (小枝, lit. "small branch") from Fumikado, which creates music that attracts spirits but can only be used by those who have crossed over life and death. Having been assassinated and brought back to life; as well as having learnt how to play a variety of instruments, including the flute, as a part of their emperor studies[2], Iyozane was one of the few people who were capable of using the Saeda. The flute seen in-game is a replica made by Sukune Katano upon Iyozane's request.

Iyozane is likely based on Fujiwara no Sumitomo (藤原 純友), a famous noble and pirate from the Heian period who had started a revolt against the royal court. Sumitomo was a local official of the Iyo Province (伊予国), where Iyozane got part of their name from. Originally tasked with suppressing the pirates of the Seto Inland Sea, he later turned to instead lead the pirates in a revolt against the Japanese imperial court. Iyozane's previous dreams of becoming a pirate and previous workplace at the Gloomy Strait are likely based on Sumitomo becoming a pirate and having acted around the Seto Inland Sea, itself a strait .

Sumitomo's revolt happened around the same time as that of Taira no Masakado's, and the two revolts are often mentioned together as the Jōhei Tengyō no Ran (承平天慶の乱, Lit. "Disturbance in the Jōhei and Tengyō eras"). While the two revolts were separate events, there is a legend that tells of Masakado and Sumitomo as youths planning together to take the capital, swearing an oath to one another that if they succeeded, Masakado would become emperor while Sumitomo would become his Kampaku, chief advisor to the emperor, a position Iyozane themself are aiming for.

Their full name is Fujiwara no Iyozane (藤原 伊代真). Their last name Fujiwara (藤原, "Wisteria field") is an actual and a common surname used in Japan - it should be noted that while this is one of the evidence which proves the political influence of the Fujiwara Clan, there are some Fujiwaras that aren't related to the Fujiwara Clan. The hiragana character no (の) used here indicates a "belonging", thus the English equivalent of their name would be "Iyozane of the Fujiwara". In ancient Japan times, it was common for aristocrats with a clan's name to have no between their clan's name and first name. The characters for Iyozane (伊代真) literally mean "true generation". The first kanji is shared with the Iyo Province, where Sumitomo led his own revolt in the year 939.

Iyozane has short silver-blue hair and eyes of the same color. They wear a black headband and Japanese clothing. They are also often surrounded by spirits. In Brilliant Pagoda or Haze Castle, the spirits around them appear to resemble the Bakebake. 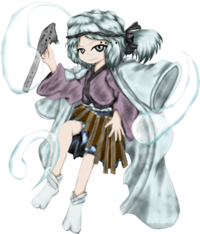 Fumikado convinces Iyozane to work for their resurrection ceremony, in exchange that they will become their chief advisor. Filled with ambition, Iyozane agrees and with their boat, rides towards the Gloomy Straits playing their flute as it attracts the spirits. The flow of spirits upsets the heroes, who then confront Iyozane.

Yabusame and Tsubakura encounter Iyozane and accuse them of controlling the spirits and provoking a long winter, much to the boater's confusion. After being coerced by Tsubakura, Iyozane tries to explain their own motives, but is interrupted by Yabusame, who wants to play with the flute. After being defeated and getting a hold of the flute, Iyozane says that it doesn't matter, since their part in Fumikado's plans is done.

Iyozane encounters Sukune, who are revealed to be good friends from the Capital City. When the haniwa asks why they are using a flute to herd the spirits, the boater answers that someone important promised that if they cooperated, they will make Iyozane a chief advisor. Yaorochi accuses them of being the mastermind and attacks. After being defeated, Iyozane reveals that they are serving Fumikado and guides them to the location.

Iyozane encounters Kuroji Shitodo and Adagumo no Saragimaru, who proceed to interrogate them about the amount of spirits and ask why is Iyozane gathering them. The boater reveals Fumikado's plans, saying that they only agreed to cooperate because Fumikado promised them something big in return. Believing it to be money, Kuroji demands it, but Iyozane says that they are penniless currently but can give them postpay later. Angry, Kuroji and Saragimaru fight them. After Iyozane is defeated, they say that they will remember it. When the team reaches Fumikado's resurrection ceremony, Iyozane tries to stop them, not out of concern for Fumikado, but because they want to be their chief advisor if their plan succeeds. 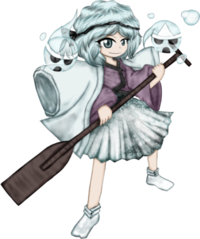 Despite their fall from grace, Fumikado plans to take over Mugenri. Together with Iyozane and Tsugumi, they go to resolve the incident. Iyozane is now doubting about being allied with someone who is now a rogue fugitive but helps them nonetheless.

Iyozane ferried Fumikado when they were escaping assassins. Fumikado asked Iyozane for their assistance and gave a tool to guide the spirits to Fumikado. Iyozane believed that they would become Fumikado's chief advisor and helped. They now question their relationship with Fumikado, but tries to help them anyway. After the events of Brilliant Pagoda or Haze Castle, Iyozane decides to stay at Fumikado's side.

They are Iyozane's partner whom they sometimes bickers with. They both work together to try and fulfill Fumikado's plans.

Iyozane and Kunimitsu used to be friends in their youth, but seem to have distanced after Iyozane left the Capital City to become a boater. It doesn't help that Iyozane is allied to Fumikado, who is now a rogue fugitive from the Capital City. Kunimitsu didn't recognize Iyozane at first, until the boater called them by the pet name of Micchan (みっちゃん, Micchan), which only Iyozane uses.

Mitori and Iyozane were both from the Fujiwara clan and were close friends in their youth. Mitori learned of their true parentage and decided to plan a coup d'état, eventually killing Iyozane. However, judging by their dialogue with Mitori, they seem to have cooperated, only complaining that the poison hurt a lot more than Mitori claimed it could. Mitori was delighted to see that Iyozane was alive, and apologized for killing their parents, but they insisted it was something that needed to be done. Iyozane, however, didn't seemed to care about it.[1]

Fujiwara no Shirogane no Sanra

Sanra was Iyozane's sibling[3]. It's unknown what was their relationship in the past, but Sanra calls them "Iyo-sama". At Brilliant Pagoda or Haze Castle, Sanra didn't recognize Iyozane (since like most people from the capital, they believed Iyozane was dead) and was shocked upon finding that Iyozane was alive all along.