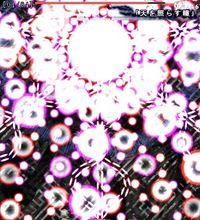 Spell cards (スペル牌, Superu fuda)[1] appear to play an important role in casting powerful character-specific magic in the Len'en Project. When using a spell card, the user's offensive and defensive capabilities appear to increase greatly. In some cases, the user becomes completely invincible for the duration of the spell. While spell cards have only been shown to be used in danmaku battles, they can be used for any attacks[2], thus it can be deduced that spell card duels are not restricted to danmaku battles either.

Making a spell card takes quite a long amount of time. Learning how to make a spell card takes practice, but a "natural" can make them by instinct. Once a card has been made, its creator can make indefinite copies of them. Spell cards contain a portion of its creator's power, meaning that anyone can use any card. However, only the original owner can draw out a spell card's full potential, and a card's power will be weakened further should it be out of a given user's league.[3] When a spell card is taken from them, the owner cannot make copies of that spell card until it is returned.[4]

An spell card before it is activated.

Currently, the known "Naturals" are:

When making a spell card, one needs to fully execute the attack once, which imbues their skills and ability into the card. This makes it so that they would not have to execute the attack themself during battle, and any tools or bullets used during the formation of the spell are not necessary either, as the using the card will conjure them up as necessary.[5] However, one may still use the original tools if they want to.

Therefore, spell cards with names implying the usage of a weapon do not necessarily involve the use of a physical weapon. While some do use an actual weapon (like Garaiya's Throwing Spear "Kama-Juumonji"), some use a weapon conjured up from the spell card's magic (As seen in Kaoru's Rapid Fire "Snake of Toxic Fog"), while some are unique, like Tsubakura's Swallow Card "Double Long Sword" and Tsurubami's Ink Card "Obsidian Blade", in which the long swords are made of ink.[6]

The idea of the system is based on the spell card system from the Touhou Project, where a noticable difference is that the "Sign" in the names were changed to say "Card" instead. In the story of the Len'en Project, however, spell cards have been stated to have different origins than in Gensokyo.[7] The exact details are unknown, but they were apparently invented by the Senri Shrine's yet-unnamed second-generation priest.[1] They act similar to karuta playing cards.[8]

Mugenri's spell card rules dictate that the winner of a spell card duel can order the loser to do anything, even killing themself. Disobeying this order would result in Mugenri erasing their existence. An order can, however, be withdrawn and one can avoid listening to the order by fleeing from the winner's sight before they issue an order. It is also possible to override existing spell orders with newer ones[9], although there is little chance of this actually happening in the series.[10] The most important thing is for the loser to realize that they have lost and that they have to obey the winner's order.

The rules are not strict but are instead flexible, the most important thing being that both parties of a duel accept the outcome.[11] For example, after being ordered to share information regarding the Shitodo family's attacker in Brilliant Pagoda or Haze Castle, Hooaka Shitodo reasoned that since it was a three on one match that they lost, they need only give one-third of the answer. Another example can be seen in Tenkai Zuifeng's loss to Suzumi Kuzu in Reactivate Majestical Imperial, where Tenkai accidentally disobeyed the order prompting Suzumi to remind them to do so, with no serious consequence.

The spell card system doesn't restrict violence in Mugenri, but most of its residents consider it cowardly to kill in battle and would much rather restrict themselves to overwhelming the opponent and taking advantage of the order they are able to give to the loser.[12][13]

In the Len'en Project games, spell cards manifest themselves in a few ways. In the shoot 'em ups, spell cards primarily act as a source of danmaku by enemy characters as they shoot a pattern or sequence of bullets at the player character, who tries to dodge them. They each require a name, consisting of the type of the spell card usually written in kanji (although said type seemingly isn't essential) and the card's actual name in 「quotation marks」. Spell card names don't have to be unique, for example, Lumen stole the name of their "Flash Cross" spell card from Yabusame's Intersection "Flash Cross".[3]

Most spell cards contain health bars that need to be emptied in order to defeat the spell card, but there are cards that make the user invincible, instead forcing the player to wait out the timer. Spell cards are used by bosses and midbosses on stages and have never been used by a stage enemy. They are also used as life-saving "bombs" by the player characters that turn them temporarily invincible and cancel out bullets.