Haiji Senri (千理 牌示, Senri Haiji) is a human spell collector who admires the Senri Shrine. They are the Extra stage boss of Brilliant Pagoda or Haze Castle on the Brilliant route.

Haiji is a spell collector who runs a spell card shop on the outskirts of the Human Village both as a hobby and as a way to earn their living.[1][2] They love relying on others' spells on an everyday basis, collecting as many as possible.[3][4] They do so by beating opponents in spell card duels, though some people likened it to Haiji "stealing" their cards, which Haiji denies. They are also supposedly in possession of rare cards.[5] Perhaps ironically, Haiji has only been shown to use one original spell card that they have created themself, White Card "Origin Card".[6] As expected, Haiji is extremely knowledgeable about spell cards and the spell card system, believing that they are a wonderful thing of beauty. They have also expressed an interest in "naturals", those who know how to make spell cards without ever needing to learn how.[5][7][4] However, they seem to not understand the consequences of losing.[8]

Haiji is also a fanatic of the Senri Shrine, particularly Tsurubami Senri. Despite having the surname "Senri", they are not affiliated with the Senri Shrine's affairs whatsoever. They hung around the shrine frequently, and are one of the few people to see Tsurubami's climb to dictatorship. They are also a huge fan of the second-generation priest who introduced the spell card system to Mugenri.[1] When not hanging around the Senri nor duelling others for their spell cards, Haiji can be found in various locations of Mugenri, researching others' spell cards and making their own. Those who do interact with Haiji consider them to be a bit of a madperson, but concedes that they are an unavoidable part of life as their services are needed.[9]

Haiji is notoriously a character who blatantly copies others, particularly Tsurubami, which includes having a similar surname and having a theme melody copied from "Eternal Dance Engine ~ Shall We Dance!!". Haiji also has copies of spell cards that are, interestingly, based on those from the Touhou Project. Suzumi Kuzu, Hamal Cine specifically, makes a vague mention that they recognise seeing these spells at a previous time.[4] When JynX was asked about this, they left it up to one's imagination,[10] with two primary theories include: Haiji may have been to Gensokyo or have ties with it somehow to explain why their spell cards are Touhou-based; or, more likely, the spell cards are a coincidence and were originally owned by other Mugenri residents.

It is said that Haiji is an endlessly irresponsible person.[1] They have a hard time listening to what others are saying, jumping to conclusions very quickly.[11] They are said to be a faddist[4] and nothing but a burden. Tenkai Zuifeng considers them to be an idiot.[8] They tend to be forgetful, forgetting their own name at one point.[7]

They were described to have basic vocabulary,[11] while having rather energetic speech patterns but are also rather enthusiastic as a fanatic.

Haiji's strength remains a mystery, with their original spell card being used at its full stregth as an Extra Stage boss. Because they are using spell cards that are not theirs, relying on the power of others, their level of power is not easily determined.[12][4]

Haiji is able to manipulate cards. As such, they are capable of copying other people's spells and making them their own.[1] The ability has some resemblance to Tsurubami's "raising poultry". Due to their ability, Haiji can draw out much more power from spell cards not made by them than other people can, up to more than 50% of a card's power.[13]

Their full name is Haiji Senri (千理 牌示). Their first name Haiji (牌示) means "showing cards". Their surname is Senri (千理), with the first kanji sen (千) meaning "thousand" and the second kanji ri (理) meaning "logic" or "reason". The surname is pronounced the same as Tsurubami Senri's surname (闡裡), as it was copied from the Senri clan, but with the kanji modified slightly.[1] Haiji changed their surname after they became a fan of the Senri clan (which was when Tsurubami was the current priest[14]), but didn't outright copy the name as it would have been a nuisance to the Senri clan.[11] They mention that they can change their surname as often as they want.[8] As such, it is unknown what their original surname was, or if they had other surnames previously.

Haiji has purple eyes and blue hair with light-cyan ends, which notably seperate unusually. They appear to wear an unusual brown hat with light-cyan stripes that seens to be shaped like a chestnut. They wear a light brown, see-through dress with a pink and green striped shirt underneath. They have blue, see-though palazzo trousers and with what appears to be shorts underneath and brown/cyan shoes. While Haiji is a fan of the Senri clan, their clothes are based on their own fashion sense, according to JynX.[15]

When JynX was asked about why Haiji has different eye and hair colours unlike most other character, they answer that it's a secret.[16] 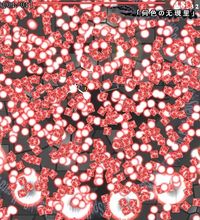 Haiji first appears as an Extra stage boss of Brilliant Pagoda or Haze Castle on the Brilliant route. They can only be encountered if the player unlocks the Extra Stage by defeating Suzumi Kuzu in the main game. Beating Haiji, along with Yago Ametsukana, is a requirement to unlocking the Extra+α stage of the game, which can be accessed after defeating Xeno a.

Haiji is seen hanging around the Shrine Road, meeting the various protagonists with little to no reason other than to collect more spell cards.

Gameplay-wise, most of Haiji's spell cards are directly based on the spells used by various characters from the Touhou Project, mainly final and extra bosses. They attack with nine copied spell cards and one original spell. Haiji also makes use of ofuda in their danmaku, which has rare usage in the series. Just like Tsurubami and Tenkai, when Haiji moves around, their sprite becomes black and white. JynX has stated that this is because they are copying Tsurubami.[17] After the battle, Haiji loses and their spell cards were taken by the New Emperor, Preschool and Scoundrel teams. The Shrine Team takes a very-rare pen while Suzumi lets them go.

Haiji admires the Senri Shrine and the Shinto priests from here, frequently hanging around the shrine, and going as far as to changing their own surname to be similar to "Senri". As such, they are a huge fan of the founder of the spell card system to Mugenri, the second-generation Senri priest. They also consider themself to be such a big fan that they own a pen that was originally the first-generation Senri priest's.[11]

Haiji is Tsurubami Senri's biggest fan and idolizes them, going as far as to love them. Tsurubami once apparently saved Haiji from something. They believe that Tsurubami also likes Haiji, to which Tenkai claims is false.[8] They were one of several people who got a close look at the course of Tsurubami Senri's conquest of Mugenri.[1]

They were very quick to get excitement from meeting Tsubakura Enraku and Yabusame Houlen, going as far as to ask for an autograph, but Tsubakura did not want any part of it.[11] Haiji even took an interest in the Shitodo siblings solely because they were Tsubakura and Yabusame's friends.[7]

Haiji seems to be jealous of Tenkai for being Tsurubami's best friend and close confidant. On their side, Tenkai considers them an annoyance and hates them.[8]

While it is unclear how, Haiji is apparently acquainted with Suzumi and knows that they are an informant.[4]

As Haiji was constantly around Tsurubami, they became acquainted with Xeno a as well.[18]