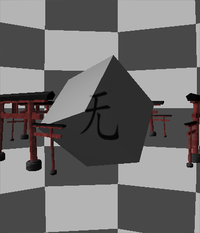 An example of a barrier:
The Mugenri Barrier, a double-layered barrier which separates Mugenri from the Outside World.

A Barrier (結界, Kekkai) is something that separates two spaces, preventing free movement between the two sides, or access to one side from the other.

In the Len'en Project, barriers are more conceptual and are, according to Tenkai Zuifeng, "impossible for humans to fully understand". Barriers are inscribed on the underside of regular space, giving the "front" and "back" sides separated by the barrier. However, the barrier does not physically exist, thus there is only "front" and "back", and the different phenomena on each side, nothing in between. Barriers have no thickness and mass and can be said to not exist in this world, and thus are "unreal".[1]

Barriers have a variety of applications, as shown below:

The Mugenri Barrier is a double-layered barrier that separates Mugenri and the Outside World. According to Tenkai and Yabusame Houlen, it is more accurate to describe the two worlds as "front" and "back" instead of "inside" and "outside".[1]

Dimensions themselves are barriers that shape the boundaries of "possibility" within it, likely being what gave Mugenri rules that allow flight. According to Yabusame, they taste like tartar sauce, which is confirmed by Tenkai.[1]

The Curtain of Awakening was used by Tsurubami Senri to temporarily transform the Dimensional Cave to better suit the outsiders' abilities.