This article describes the overall gameplay and background information for Evanescent Existence.

Evanescent Existence plays much like a typical Touhou Project game in that the player character always faces the top of the screen, shooting at stage enemies, dodging through intricate bullet patterns and confronting challenging bosses at the end of each stage.

There are four "modes" of difficulty to choose from in the main game. Additionally, there are three levels of difficulty for the Extra Stage.

In v1.20a, a "Level" system was added to the game. This is a minor modifier that you select before choosing one of the regular difficulties.

Basic Level works the same as the previous v1.10a, and is not marked on the screen during gameplay like Light Level is. Light Level does not change any enemy patterns, it just gives you more resources.

You start the game with either 4, 2, or 5 bombs, depending on whether you pick Yabusame Houlen, Tsubakura Enraku, or Suzumi Kuzu respectively. Extra bombs can be obtained by collecting green bomb items, which are dropped by certain enemies and midbosses. You can carry a maximum of 9 bombs. Dying will reset the amount of bombs to whatever you had when you started the game.

Until v1.10a, flash bombs were not implemented into the game, only being initially used in Earthen Miraculous Sword and onwards.

In this game, lives are represented by red stars. Extra lives can be obtained by collecting purple 1-up items dropped from certain enemies and midbosses. They are also awarded at 10, 20, 30, 50 and 100 million points.[Are there any more point intervals?] You can have up to 10 lives.

As of v1.10a, Evanescent Existence has had three characters to choose from: Yabusame Houlen, Tsubakura Enraku, and Suzumi Kuzu, with the latter two having to be unlocked beforehand. Each has their own shot type, bomb, and (also as of v1.10a) flash bomb. as well as different movement speeds. 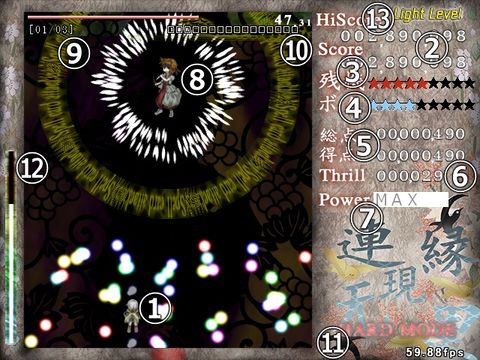