Xeno a (ゼノア) is a human who works as a corrupted casino dealer at the Dhanya Nakta Hotel & Casino in Devanagara with the ability to manipulate probability. They were a sparring partner of Tsurubami Senri. They are the Extra stage boss of Brilliant Pagoda or Haze Castle on the Neutral route.

Xeno a is described to be a completely normal human, believed to originate from the Outside World. Thanks to the curse of their ability to manipulate probabilities, Xeno a got tired of the world around them due to being too perfect. Their ability made them essentially immortal, but also others around them unlucky, thus they eventually stopped communicating with people. Having this ability may have ironically being the worst luck of their life.[1]

Over time, they find themself in Mugenri, and was able to easily find a job working at the government-operated Dhanya Nakta Hotel & Casino[2] in Devanagara thanks to their ability. They had to do something to not get bored. Being a casino dealer was very practical, as they were able to determine a patron's outcome on whether they should win or lose without consequences of cheating. Despite being a corrupted dealer, they came to be highly valued over the years.[1]

One day, Tsurubami Senri entered the casino during their dictatorship, sitting at Xeno a's table. While the priest was gambling, they were quarreling because they were losing. Learning that they were getting rigged, they got incomprehensibly angry, and thus attacked Xeno a. Xeno a was experiencing fear for the first time despite their ability, which forced the dealer to escape the battle. Xeno a believed that they would never have the experience to feel the fear of death for eternity, yet they felt that danger. Bewildered by their first-time sense of terror, they fled without thinking it further.[1]

Xeno a could not stop thinking about the day they fought Tsurubami for the first time, believing that a death battle is what they have been seeking all along. Thus, they challenged Tsurubami again and again with a sense of uncertainty. Over countless battles, they both more or less reach a draw without a real conclusion, as the battle itself was the satisfying part.[1] It is said that Xeno a is one of the few things that Tsurubami did not have control over during their dictatorship.[3]

Sometime after Evanescent Existence, Xeno a heard rumours that Tsurubami had left Mugenri. They became very depressed due to this fact, knowing that there isn't anyone else who could overcome their ability. However, they also heard that Tsurubami left temporary priests, Yabusame Houlen and Tsubakura Enraku, in their place. Xeno a felt that these should be strong enough, and thus used provoking methods the same way they did on Tsurubami to lure them.[1] They plan to find a new playmate.

Xeno a has been described to be rather shady and a con artist.[4] They speak rather formally,[5] acting very carefree in their speech, but is also rather blunt.

Xeno a is also addicted to fighting immensely due to their ability,[3] which Xeno a finds to be one of the few pleasures in life.[5] They find that the thirst to fight feels satisfying, even if they lose, going as far as to bet their life.[6] If they cannot find someone capable of fighting them like Tsurubami Senri, they can easily get depressed.[1] Messing around with the fear of death gives them a rush of adrenaline.

Xeno a is considered to be one of the most powerful characters in the Len'en Project. They are the only character thus far capable of fighting Tsurubami Senri properly, who is known to be the most powerful.[7] They have battled each other to death while drawing many times, impacting the area around them,[8] although it is left open as to whether Tsurubami was going easy or not.[1] Like Tsurubami, Xeno a is also a feared individual by various Mugenri residences, even by Tenkai Zuifeng.[3][9] They are undefeatable, with JynX prompting that they're incredibly tough in a head-on fight.[10] In Brilliant Pagoda or Haze Castle, Xeno a was going easy on the protagonists, even mentioning that it is a personal vice of theirs to equal their power to their opponents.[5]

Xeno a's ability is described as being able to make any possibility "inevitable", no matter how improbable something occurring is. Anything deemed unlikely by statistics would more likely to happen (Such as a coin flip landing on neither heads nor tails,[11] a 6-sided die displaying the number 7, etc.).[1] This means, for example, Xeno a could set the probability of them not getting tired to 0%.[12]

They constantly use it unconsciously, making people around them unlucky and disallowing themself to die. However, Xeno a has been shown to have conscious control of their power as well, as it became very useful as a casino dealer, allowing Xeno a to moderate who wins and who loses, rigging the system without physically cheating.[1] They also use it to restrict their opponents' movement to prevent them escaping in Brilliant Pagoda or Haze Castle. When using their ability to provoke Yabusame Houlen and Tsubakura Enraku (which was making coins standing up), they did not know what was the actual provocation, leading Tenkai Zuifeng to believe that they were the one to cause miracles (i.e. the game's sub-events) to happen throughout BPoHC.[9][13]

Despite how powerful this ability is, they are unable to manipulate something with an actual probability of 0%, but since the human mind knows that not everything is completely impossible, this does not restrict their power too much. Xeno a is also unable to control the ability's natural activation, so it will not activate at convenient times, such as attempting to remember encountering Suzumi Kuzu.[14]

Their probability power extends to even their vital functions, and thus, they are able to trump death and be virtually immortal thanks to their ability. They cannot die, age or get sick, even if they wanted to due to it being manipulated unconsciously. This immortality, however, is not permanent. Tsurubami is described to be the only one who made the chance of Xeno a dying increase. Additionally, Suzumi Kuzu mentions that the spell card rules could also make Xeno a disappear.[6]

JynX was asked about the meaning behind the name, especially the "a", but they responded with "you're free to theorize."[16] A hint given is that fans should "consider why 'Xeno' and 'a' are separated in writing".[15] A possible meaning to "Xeno" in English, is that it is a prefix originating from the Greek xénos, meaning "stranger" or "foreigner", which would fit them being an outsider in Mugenri. The "a" may relate to the ace cards in poker, since there are aces behind Xeno a. It is unknown if it is their real name.[3]

"Xeno a" is written as "世乃亞"[a] in Chinese[17], which is a phonetic translation of "Xeno a" into Japanese kanji, used as Chinese. 世乃亞 would translate into "the world is secondary/inferior".

Xeno a has been shown to have short, wavy blonde hair and yellow eyes. They wear a black fascinator with a die accessory sitting on top, with a notable red/black yin-yang symbol as the number one dot. They wear a black vest that has black and white pieces of cloth attached that partially covers a black skirt with red stripes. They have a red bow tie and a white shirt underneath the vest that has puffy sleeves. On the ends of both wrists are white cuffs with black buttons. On the legs are white high thighs with black ribbon adornments on the ends, and brown shoes.

Behind them are several casino games, including a roulette board and a blackjack board. Three face cards also appear alongside the boards; a light pink card with the ace of hearts, a dark green card with the ace of spades, and a black card with the Eye of Senri. There are several pieces of text also inscribed on the blackjack board, including "INSURANCE PAYS", "BLACK JACK", and the sentence fragment "Dealer must draw to 16 and stand [on 17]" which is partially obscured due to being behind Xeno a.

A fan compared Xeno's overall design to Lunasa Prismriver, but JynX brushed it off as an unintended coincidence.[18]

Xeno a first appears as the Extra stage boss of Brilliant Pagoda or Haze Castle on the Neutral route. They can only be encountered if the player unlocks the Extra Stage by defeating Suzumi Kuzu in the main game. Beating Xeno a would also lead to the Extra+α of the game, providing that the player has also beaten Yago Ametsukana and Haiji Senri beforehand.

As a casino dealer, they are very fitting for the game's randomness. As such with the gameplay, Xeno a is the direct cause of the many sub-events that happen throughout the game.[13] Even Tenkai Zuifeng made the subtle reference to this, describing it as "various consequences".[9]

Although Xeno a does not appear in the prologue, they are vaguely referenced. After Kuroji Shitodo tossed their coins on the floor at the Senri Shrine, they all land on the floor standing. Yabusame Houlen was the first to notice this, with Tsubakura Enraku thinking it was just a trick done by Kuroji. Jinbei, however, knew different, that it was a way for Xeno a to provoke the newcomers for battle.[1] Jinbei told the two to deal with the war along with Shion, but was also being very vague about Xeno a's presence, brushing it off as just an additional danger that is far down the Shrine Road.[11] 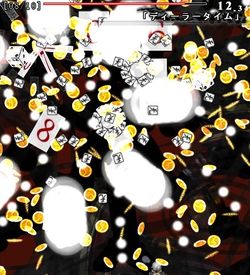 An example of Xeno a's spell card: "Dealer Time", which is heavily RNG-based.

Xeno a crossed the Gloomy Straits from Devanagara to wait patiently on the Shrine Road for a battle with the Shrine priests. After being troubled by Suzumi Kuzu, the player protagonists eventually meet Xeno a. While it was the Shrine Team that Xeno a was expecting, the other teams would meet Xeno a by unintended chance.

Xeno a lost to the protagonists but expressed satisfaction after fighting them. Xeno a revealed that they were going easy, not taking the fight seriously. They hoped to have another round next time, warning that the heros should get stronger while they wait patiently for Tsurubami's return.

Gameplay-wise, Xeno a uses a set of 10 spell cards, typical for an Extra Stage boss. During the fight, they use various components of casino games; cards, six-sided dice, slot machines, coins, a digital game of chance, and danmaku that resembles a roulette board. Notoriously, the battle is heavily RNG-based, such as the slot machines shooting out a density of coins between 1 to 9, and even the dice having random path-finding.[19] Xeno a also makes use of ofuda in their danmaku, which has rare usage in the series.

The relationship between Xeno a and Tsurubami is a very interesting one, as they first met at the casino where Xeno a worked, and then battled. But after this battle, Xeno a liked the thought of a battle and kept challenging Tsurubami to numerous battles, almost winning, almost losing, but ultimately drawing. It seems that the two are on good terms as sparring partners.[4] They might have even looked up to Tsurubami as a role model, as stated in their backstory.[1][14]

Naturally, Tenkai and Xeno a would know each other due to Tsurubami's connection. Tenkai preferred if they did not meet Xeno a again, knowing that they cannot compete against Xeno a. They were confused why Xeno a would want to fight them after Tsurubami left.[9]

Tsugumi Umatachi appears to know about Xeno a due to their connection with Tsurubami, knowing that they are a powerful being not to be messed with. Xeno a recognises Tsugumi who meddled in Tsurubami's affairs.[3]

As Haiji was constantly around Tsurubami, they became acquainted with Xeno a as well.[20]

A Probability Manipulation Point from BotC.