Tenkai Zuifeng (瑞風 天堺, Zuifon Tenkai) is an apprentice barrier builder at the barrier shop, "Azumaterasu". They're also Tsurubami Senri's ally and the Extra Stage boss of Reactivate Majestical Imperial, as well as a playable character (and possible final boss) of Brilliant Pagoda or Haze Castle.

Tenkai is a descendant of a particularly famous barrier builder, and has a lot of acquaintances, both human and otherwise, across all Mugenri, including the Senri Shrine. Despite their lack of experience and notable achievements, they're known as a prodigy.[1] Tenkai is the right hand person of Tsurubami Senri and, similarly to them, are feared across Mugenri as an iron-fisted dictator.

Tenkai is a straightforward, often snarky person. They are quick to point out someone else's flaws to make jokes at their expense. They're very knowledgeable about the state of Mugenri and have been shown to research previous incidents thoroughly. As they were Tsurubami's second-in-command, they're rather stern and believe that Mugenri's balance was easier to keep in check through force.[2] Despite this, they've been shown to be willing to forgive wrongdoings, such as letting the Dragonfly Army off without pursuing it if they were to withdraw.[3]

Tenkai has the versatile ability to build barriers, which are typically shown in-game as inverted areas in space. They've shown various uses of it, such as teleporting bullets in their attacks, setting a barrier within speech[4] or making one synchronized with their memories in a futile attempt to overcome Suzumi Kuzu's ability.[5] They're also capable of repairing barriers to some extent, as shown in Reactivate Majestical Imperial's Extra Stage. However, they're not nearly as good at repairing as they are at building barriers, especially when it comes to those made by other people.[1]

Tenkai is loosely based on the Buddhist monk "Tenkai" (天海), who was famously an advisor to the shogun "Tokugawa Ieyasu" (徳川家康), as well as the two shogun that came after. This relationship with Ieyasu is referenced in Tenkai's relationship with Tsurubami Senri, the former dictator of Mugenri, as well as Yabusame Houlen and Tsubakura Enraku, Tsurubami's successors. Other than this, the relationship between Tenkai and the monk is mostly in name.

Their full name is Tenkai Zuifeng (瑞風 天堺, Zuifon Tenkai). The kanji in their given name contains ten (天) that means "heaven" and kai (堺), an old-fashioned way to say "border". Their name might be based on "Tenkai" (天海), a Japanese Tendai Buddhist monk of the Azuchi-Momoyama and early Edo periods, whose first Buddhist name was "Zuifū" (随風).

The kanji in their surname Zuifeng (瑞風) literally means "rising wind". The spelling that ends in "feng" is pronounced the Mandarin Chinese way, whereas in Japanese it would be pronounced as "Zuifon". The reason for this is because Tenkai is related to the Chinese Ideology of Yin-Yang and the Five Elements (陰陽五行思想).[6] A possible connection is that "Wind" (風) is considered to be a part of "Wood" (木) in the Feng Shui (風水) and Chinese Medicine (中醫) branches of the ideology, as well as in some older iterations of it. Another possible connection is that barriers (結界) in Feng Shui utilises the ideology of the Five Elements to set up.

Tenkai is often nicknamed "Melon" (メロン) due to their general appearance, especially by Sukune Katano and Sese Kitsugai. Despite it being their favourite food, this generally annoys them.

Tenkai has bright orange hair and eyes. They have separate outfits for work and daily life.[7] The former, seen in their boss appearances, has them in a short, plain green robe with white edges, a yellow mantle with various glyphs on its long sleeves, light brown shorts, red leg wraps and yellow and green shoes. They also wear a black hairband (a red and black one in Reactivate Majestical Imperial), which is based on the design of nokimarugawara (軒丸瓦), and a long, blue scarf with white ends. Their casual outfit is rather similar in design, albeit with some differences - Tenkai's robe has a more elaborate design and goes down to their knees, their mantle has frills and is tied in the front with a red ribbon, they wear zori instead of their usual shoes and ditch the blue scarf.

Their clothing often leads to being likened to a Yubari King melon in-universe (which, perhaps not so coincidentally, is also Tenkai's favorite food). Hilariously, Tenkai's Brilliant Pagoda or Haze Castle boss art shows the kanji for yubari (夕張) inscribed on their left sleeve, as seen here. 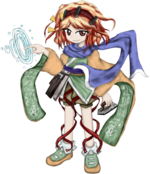 After a berserk Lumen Celeritas absorbed moonlight by accident during Earthen Miraculous Sword and weakened the Mugenri Barrier, Tenkai was tasked to repair it by Jinbei shortly after the incident. However, they neglected to do so, indirectly leading to this game's events as the soul-eating flower Harujion sprouted in Mugenri and started to absorb spirits from the Outside World that came from the hole in the barrier. This resulted in the birth of the chimera soul Shion and a long winter in Mugenri.

Despite Shion's defeat, the warmth didn't return to Mugenri. Jinbei recognized that the cause is the hole in the barrier, so the protagonists go to chastise Tenkai, who's currently repairing it at their masters' request. By the time the heroes arrive, the barrier builder's work is almost done. Tenkai challenges the substitute priests to a fight in order to test their strength and is eventually defeated. 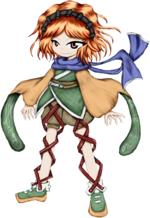 Tenkai in BPoHC as a Boss, wearing their work uniform

Tenkai is worried about the upcoming war between the Dragonfly Army and the Imperials. They go to warn Yabusame and Tsubakura about it, but the two were already gone. On the way to the shrine, Tenkai encounters Sukune Katano and Sese Kitsugai, who were plotting revenge on Yabusame and Tsubakura, and now they want Tenkai to help them. The barrier builder finds themself dragged by the two youkai around Mugenri, as they find out more about the war and what caused it.

In all routes, it's revealed that Tsurubami and Tenkai were either feared, hated or respected due to being the dictators of Mugenri and their immense power. Tenkai starts to realize how much Tsurubami's decision to leave for the Outside World has affected Mugenri. At the end of the Brilliant Pagoda or Haze Castle routes, Tenkai is asked to be the new ruler, but Tenkai declines, saying that their loyalty lies with Tsurubami. In the end, they meet Suzumi Kuzu, the one responsible for the words about the "The mirror of Heaven shall split" in order to lure Tsubakura. Suzumi reveals their intention to make Tsubakura's life a living hell and after a hard fight, Suzumi erases their memories again (with Tenkai being the only one who vaguely remembers).

Tenkai already knew Tsurubami before the start of their conquest of Mugenri. They helped each other on multiple occasions[8], including resolving incidents together,[7] and they bonded as fellow outside-worlders.[2] In addition, Tenkai's family has ties with the Senri Shrine, which could be the reason for them becoming acquainted.[1] As Tenkai knew Tsurubami for a long time and was close enough to them to be considered their right-hand person, they were similarly feared across Mugenri. They hold Tsurubami in extremely high esteem and miss the adventures they departed on together.[9] Tenkai believes Tsurubami's approach of using force to unify the people had merit[2], and that Mugenri has gotten lonelier without them around.

It's unknown what exactly Tsurubami thinks of Tenkai, but they call them by their last name, Zuifeng, as a sign of their special relationship and because they like the sound of it.[10] In addition, they both have the ability to turn monochrome based on the same principle[7] and have similar spell cards with a crane motif. It appears that Tenkai is also the only one who knows the real reason why Tsurubami left Mugenri.[5]

Tenkai appears to not get along particularly well with their superiors, as they often put Tenkai to work on barrier upkeep not just in order to train them, but to damage their reputation as well. As they've given them the task of fixing the Mugenri Barrier, Tenkai is fed up with them and ended up altering the barrier in a small way in order to get back at them. The results of this have yet to be revealed.[1]

The Zuifeng clan and the Senri Shrine had known each other for generations, which includes being acquainted with Jinbei. However, thanks to their relationship with Tsurubami, Tenkai knows Jinbei personally. Jinbei asked Tenkai to repair the Mugenri Barrier in person shortly after Lumen damaged it.[11] They chide Tenkai as soon as they meet in Brilliant Pagoda or Haze Castle's prologue, but Tenkai doesn't seem to particularly mind it.[12]

Sukune and Sese rope Tenkai into their treasure hunt in Brilliant Pagoda or Haze Castle. Unlike most others, they don't fear Tenkai - Sukune knows of Tenkai's lineage[13], while Sese simply doesn't know much about them.[7]. Tenkai considers the two a nuisance, but still expresses concern for them[2][5] and goes along with their whims because it reminds them of their adventures with Tsurubami.[9]

Tenkai taught Saragimaru the sealing ritual for the Tasouken. Saragimaru dislikes Tenkai due to their slyness and because Tenkai scammed them into paying a high amount of money for the ritual.[14]

Tenkai is stern with the substitute priests, as they believe the two can't maintain peace as well as Tsurubami could. However, they're still keeping an eye on their growth, as Tsurubami also had difficulties starting out[2], and they share small gifts with them.[12]

Haiji is Tsurubami's biggest fan. Tenkai considers them a hindrance.[15]

While not confirmed, when asked about Tenkai's relationship with Clause, JynX dodged the question much more strongly than usual, implying that there's a link between the two.[16] There are a scant few subtle connections between the two lending credence to theories about the subject: