Saragimaru is able to control clouds and create cloudy weather. In the Extra Stage of Earthen Miraculous Sword, they used their power to make it snow despite it being a clear sky.

The leader of a powerful clan (implied to be Yamata no Orochi) was betrayed and killed by other enemy clans and his body was dispersed in several fragments. Saragimaru was born from his eye, and because of it, they're very knowledgeable. Yaorochi and their seven siblings decided to get revenge on Orochi's murderers, but most of them died before achieving their goal. Yaorochi was very cold and distant to their younger siblings and for some reason never got along particularly well with the youngest, Saragimaru, which even eventually escalated to violence. Shortly, Yaorochi abandoned them in order to look for the sword. They searched for it for several years and was very disappointed when they found it all rusted.

Saragimaru, who had silently looked after Yaorochi all those years, requested Sukune Katano to make a clay sword for Yaorochi, making magical inscriptions on its underside so that the sword's power would be subdued, preventing it from carrying out its normal function. However, afraid of their sibling's rejection, they never went to pick it up. 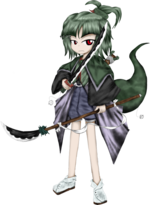 It's revealed that they soon regretted requesting the Tasouken, as they knew it was dangerous for it to be restored.

A few days after Yaorochi's defeat, the cloudy weather returns. Drunkenly, the heroes go to investigate and they found that this time the culprit is Yaorochi's younger sibling, Saragimaru. They wanted revenge for the sabotaging of the Tasouken's ritual and thus ruining of Yaorochi's happiness, so they lured the heroes into a trap to murder them. They are defeated and the heroes attempt to befriend them by inviting Saragimaru to their sake party. 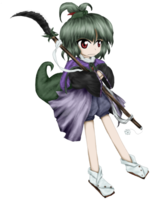 Saragimaru was the one who instructed Sukune to build a replica Tasouken, along with inscribing a magical incantation onto it so that the reborn sword could not display its full power. Despite this, Sukune does not have a clear memory of Saragimaru.

Since Reactivate Majestical Imperial, Saragimaru works as Kuroji's unwilling servant, something the orochi is not happy about. Saragimaru considers Kuroji a contradictory and vicious scoundrel who gets away with everything. Kuroji doesn't mind to such things, but when angered enough, they will not hesitate to remind Saragimaru of their blackmail. Kuroji likes Saragimaru because of their strength and straightforward down-to-earth personality. However, Kuroji is willing to blackmail the orochi into cooperation or sell their identity. Despite Kuroji's terrible treatment of Saragimaru, it would seem that, on some level, the orochi enjoyed the company of Kuroji, thinking it a good way of passing the time.[1]

Prior to the events of Earthen Miraculous Sword, Saragimaru bought information on how to seal the Tasouken's power from Tenkai. Despite so, Tenkai is not exempt from Saragimaru's broad contempt for humans.