The Senri Shrine (闡裡神社, Senri Jinja) is a key location of the Len'en Project. It is a big Shinto shrine and home of the Senri priest Tsurubami Senri and their shikigami Jinbei. Out of the many shrines in Mugenri,[1] the Senri Shrine is one of the only two to be properly introduced in Len'en's story so far (the other being a shrine run by youkai) and is quite possibly the most significant one. As of present, it's also the home of the two substitute priests: Yabusame Houlen and Tsubakura Enraku. 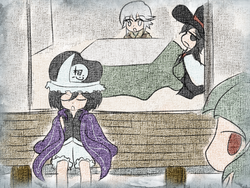 Kuroji Shitodo sitting on a veranda at the shrine.

The Shrine is described as a "typical Shinto shrine" where exorcisms and good-luck charms can be performed,[2] located right in the centre of the Sanctuary.[3] It is also said festivals can be held there. There is known to be a grounds, a garden, a veranda, a kitchen and a research room for Tsubakura.[4] It is known that the shrine is dedicated to a single main god, but that several others are enshrined alongside them.[5]

Like any typical Shinto shrine, the Senri Shrine's main income sources are receiving donations through offerings to its gods and selling ofuda talismans. The shrine's offertory box can apparently only be opened by the shikigami Jinbei, and also accepts donations in multiple instalments.[6] The shrine's ofuda are specifically the ones that Tsurubami, Haiji Senri and Xeno a are seen to use, with the kanji 无 found on top. These are purchasable at the shrine.[7] In addition, the shrine also seems to offer custom-made talismans if requested, as seen from Souko Shirami requesting demon-warding charms from Tsubakura.[8]

Leading to the shrine itself is the Shrine Road, which is a very long path that cuts right through the Sanctuary. It is said that the humans of Mugenri are unable to even pass through the first torii on the Road despite the shrine's apparent importance, making worshippers a rare sight.[9] The shrine's technology advancement is considered to be super low,[10] but the area around the shrine is described to have natural beauty.[11]

The shrine has had generations of Shinto priests who had the head role of taking care of the shrine and its importance with Mugenri. The head priest's duties are described as "involving mostly incident resolving, maintenance of public order and maintaining the Mugenri Barrier".[2] When one is pointed as the priest of the shrine such as Tsubakura, they are given a large book to learn about their quota, and is taught on a daily basis of the shrine's rituals and traditions (as well as the history of Mugenri) by the shrine's shikigami.[4] However, it is mentioned by Tsubakura – and by extension Tsurubami – that all the documents in the shrine are lies.[12]

Jinbei is the shrine's shikigami, serving the role for generations and holds many secrets about the shrine's history.[12] They draw power from the shrine's priest, as well as the Mugenri Barrier and a certain "something" that remains unrevealed. In addition, they can apparently also supply spiritual power to these same sources.[13] Generally speaking, they tend to point out occuring incidents, and provoke the Senri priest to go out and resolve it.

Tenkai Zuifeng has connections to the shrine despite not living there, as they were close friends and co. dictator with Tsurubami.[17] Tenkai shows a lot of knowledge about the shrine, even some things considered secretive.[12] They would sometimes visit the shrine to socialise.[18] Despite being Tsurubami's right-hand person, Tenkai was not made a temporary priest of the Senri Shrine because they did not have the qualities of a priest.[19]

After Reactivate Majestical Imperial, Shion was adopted to live at the shrine, as they were attracted to Tsubakura's soul.[20] They were put under house arrest in a seal within the depths of the shrine, preventing them for causing an outbreak of victims.[18] Despite being a threat in leaving a trail of victims in their path,[21] Shion may be ranked as one of the gods of the shrine at a later point.[5]

While not officially affiliated with the Senri Shrine's affairs under any capacity, Haiji Senri can be seen hanging around the shrine frequently. They were one of the few people to see Tsurubami's climb to dictatorship.[14] They are a huge fan of the second-generation priest for introducing the spell card system. They also consider themself to be such a big fan, that they own a pen that was originally the first-generation Senri priest's.[22]

The Eye of Senri, the general icon that represents the Senri and the shrine.

The Senri Shrine has major significance in Mugenri. According to Tenkai, the Senri Shrine exists as a "pillar" for Mugenri, and without it and its priests, Mugenri would collapse. This is why Tsubakura and Yabusame are priests, and simply existing as priests maintains the "pillar" while Tsurubami is away.[17] During Tsurubami's dictatorship, the shrine especially had the role of leading Mugenri.[23] However by the time of Brilliant Pagoda or Haze Castle, balance maintained by Tsurubami's authority has officially collapsed.[24] Many people were relieved that they're gone, allowing some people to feel free going on the loose.[17] Tsubakura and Yabusame, however, have so far managed to prove their worth as Senri priests.[25]

The shrine does not have a flag, but it does have an unknown crest.[7] Which is likely associated with the crest is the "Eye of Senri", an important symbol associated with the Senri as a whole. It is more than often shown as a half-closed eye with a black background. It's a common symbol in the series, shown often even by characters not directly associated with the Shrine, such as on one of Xeno a's cards, Suzumi Kuzu's shirt, and even Tom C. Zemlja's main body. The Senri even have a branch house in the outside world.[26]

Various residents of Devanagara have a complex dislike for the Senri Shrine, particulary Kunimitsu Ooya,[27] Fujiwara no Shirogane no Sanra and Ooama no Ake no Mitori.[28] Suzumi Kuzu (specifically, Arde and Benny) hold a strong grudge against the Senri for unknown reasons.[29] On the flipside, various residents of Mugenri such as Garaiya Ogata,[30] Souko Shirami,[30] Xeno a[31] and Taira no Fumikado[32] either have a more positive outlook on the Senri or don't consider them an enemy of sort.

During the Heaven-Shadow War of Brilliant Pagoda or Haze Castle, the shrine's position could be considered to have a neutral stance, despite being the centre of the Sanctuary, one of the two factions of the war. The emperor of Devanagara gives acknowledgement that the Sanctuary forces they are fighting against – the Dragonfly Army – comes from the Youkai Alliance rather than the shrine.[33] The field marshal of the Imperial Military also mentioned that the shrine's representatives should have stayed out of the conflict.[28] Members of the Dragonfly Army (such as Kujiru Kesa, Para and Taira no Chouki) also made it clear that the Senri need not to interfere as the Youkai Alliance were the ones to represent the Sanctuary in battle.[30]

Generally speaking, the Senri Shrine is primarily featured in the prologues and the endings of all the games. The various endings in particular have the protagonists (either Yabusame, Tsubakura, or both) talk about the outcome of the game's incident along with Jinbei.