Sese Kitsugai (乞骸 セセ, Kitsugai Sese) is a gashadokuro that loves excavating underground. Their goal is to find their corpse from when they were alive in order to regain their true power.

Sese is the first stage boss, Extra Stage midboss and Stage Ex+α Boss of Reactivate Majestical Imperial and later re-appears as a possible stage 3 boss on the Neutral route of Brilliant Pagoda or Haze Castle. Sese uses their powers as a gashadokuro in order to search for their corpse. However, they have no memories of when they were alive and much less of their corpse's location. It's stated they are actually a great youkai who lost their power somehow and wants to find their bones in order to become strong once again.

Despite being a gashadokuro, which are traditionally depicted as being made up of a number of skeletons, Sese was only made up of a single skeleton. The bones visible on their body represent the parts of their skeleton that they have recovered.[1]

Sese is a cheerful, happy youkai, but they get easily depressed when things don't go their way (which is very often); typically when they fail to find their corpse or get defeated by the heroes. They're very childish and speak in third-person. Sese is very determined to get stronger and, as of Brilliant Pagoda or Haze Castle, trains every day to beat the protagonists.[2]

Knowing the underground (Conquering the above-ground)

Their ability is to know what is underground and control it. In combat, they can throw bones at their enemy. After absorbing souls, they become so powerful that their ability gets upgraded to that of conquering the above-ground. Each form has a different appearance.

Sese has been shown to be able to absorb souls to temporarily increase their power, and it is known that they can do the same using other people's bones as well.[3]

Sese is largely based on the youkai gashadokuro, a relatively modern invention first seen in the 1968 children's book "Complete Collection of the Word's Bizarre Thrillers 2: Monsters of the World" (世界怪奇スリラー全集2 世界のモンスター), where they are described to be "a large skeleton youkai born from a massive gathering of skeletons of those who died in war and didn't receive a proper burial, animated by their desire for vengeance".

The gashadokuro was further influenced by the legend of Takiyasha-hime (滝夜叉姫), specifically a mythologized telling of her story first found in the 17th century yomihon novel series "The Tale of Utou Yasutaka's Loyalty" (善知安方忠義伝) by Santō Kyōden. In the story, Takiyasha-hime and her half-brother Taira no Yoshikado secluded themselves in the ruins of the old Sōma palace after Taira no Masakado's death, where they started recruiting those still loyal to Masakado's cause. When cornered by Ooya Tarou Mitsukuni, they summoned an army of skeletons and controlled them to fight back at Mitsukuni and his men.

Based on the story, Utagawa Kuniyoshi made this famous woodblock print, where Takiyasha-hime is shown to have summoned one giant skeleton instead. This giant skeleton was then used as the model for an illustration of a gashadokuro in the 1972 children's book "The Most Detailed Illustrated Encyclopaedia of Japanese Youkai" (いちばんくわしい日本妖怪図鑑), firmly cementing the idea that Takiyasha-hime summoned a gashadokuro to attack her enemies.

This explains why Sese claims that they belong to royalty and has the same green hair as Fumikado, while the gashadokuro's relatively modern origins may explain why they're a young youkai that just gained self-awareness recently that can still mature.

Their full name is Sese Kitsugai (乞骸 セセ, Kitsugai Sese). In their surname Kitsugai (乞骸), the first kanji means "beggar", whilst the second kanji means "bone", "body" or "corpse", put together they can be interpreted as "begging for a corpse to return", which is what officials would ask for if they wish to retire from serving the Emperor and return home in Chinese courts. "Sese" (セセ) isn't their real name; it was a nickname that they thought sounded pleasant. JynX was asked if their name has a special meaning, but they responded with "you can theorize away!".[4] As "Sese" is written in katakana, it might be from Latin, a word that could mean "self". Yabusame Houlen cannot remember Sese's name, so they call them "Boney" (ホネっ子, Honekko).

According to JynX, "Sese" is written as "讓讓 (simplified: 让让)" in Chinese[5], in which an individual character means "to allow", "to yield" or "by", while two put together has no inherent meaning.

Sese has green eyes and green, shoulder length hair. They wear a skull on top of their head that's shown to be detachable. They dress in grey clothing and white bloomers, where their hat and gloves contain numerous bone-shaped ornaments. They're fairly short and are around the height of Sukune Katano and Shion.

When they absorb all the spirits the heroes had been collecting during Reactivate Majestical Imperial, Sese wears a gray and red dress with detached sleeves and spider lily motifs. In this form, the skull on their head becomes bigger and resembles more an actual gashadokuro. After the spirits left their body, Sese reverted back to their original form, but they grew a little and became much stronger.

On 17 August 2015, JynX stated that Sese is undeveloped. When asked why Sese is not at a large size as a gashadokuro would be, they expressed that Sese could be bigger if their "body is perfected", but said having them smaller is cuter.[6] 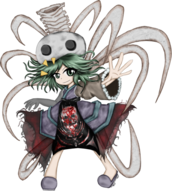 Sese in RMI, with their Ex form

Sese's role is rather limited, and they're not connected to the plot in any way. While looking for their corpse, they caused trouble at the graveyard of the Human Village, so there's a bounty for their head. They aimlessly wander around the Shrine Road, hoping to find their corpse. Instead, they bump into (or rather, annoy) the heroes and end up being defeated.

They return after finding some parts of their skeleton next to the Harujion, the soul-eating flower. When the heroes defeat Tenkai Zuifeng, Sese absorbs all the spirits the heroes had been collecting and temporarily transforms back to their true self. With their new powers, they attack the heroes but are defeated for the third time. After that, the spirits left Sese's body because it lacked a cranium.[7]

Sese in BPoHC as a boss

Tenkai Zuifeng is worried about the upcoming war between the Dragonfly Army and the Imperials. They go to warn Yabusame and Tsubakura about it, but the two were already gone. On the way to the shrine, Tenkai encounters Sukune Katano and Sese, who were plotting revenge on Yabusame and Tsubakura, and now they want Tenkai to help them. The barrier builder finds themself dragged by the two youkai around Mugenri, as they find out more about the war and what caused it.

After the spirits abandon their body in Reactivate Majestical Imperial, Sese gains a new form, which is a composite of their old form and their empowered form. They are still obsessed with finding ways to become stronger in order to become a great youkai. It also seems that they took Yaorochi's words to heart and is training to become stronger.

In all routes, it's revealed that Tsurubami and Tenkai were either feared, hated or respected due to being the dictators of Mugenri and their immense power. Sese doesn't understand much about what's going on and just attacks anyone in order to become stronger. At the end of the Brilliant Pagoda or Haze Castle routes, Sukune and Sese don't care much about the war between the Dragonfly Army and the Imperials. In the end, they meet Suzumi Kuzu, the one responsible for the words about the "The mirror of Heaven shall split" in order to lure Tsubakura. Suzumi reveals their intention to make Tsubakura's life a living hell and after a hard fight, Suzumi erases their memories again (with Tenkai being the only one who vaguely remembers).

After being defeated twice by the Senri priests during the events of Reactivate Majestical Imperial, Sese has come to view the two as their rival of sorts, and wants to become stronger in order to defeat them.

Sese and Sukune became friends after the events of Reactivate Majestical Imperial, as they teamed up in order to defeat Tsubakura and Yabusame once.

Sese made friends with Tenkai during the events of Brilliant Pagoda or Haze Castle, forcing them to come along with Sukune to train and become stronger so that the three can defeat Yabusame and Tsubakura together.

While it is unclear what their relationship is, Sese knows of the two and that they often hang out together.[8]