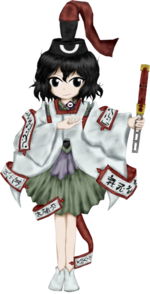 An example of an Eye of Senri, one held by Tsurubami Senri and one on their hat.

The Eye of Senri (闡裡の瞳, Senri no Hitomi) is a mysterious item that is commonly used as a symbolic motif related to the Senri Shrine and its priests.

Not much is known about the Eye of Senri, and when asked about it, JynX said that it is a secret for now.[1] Taira no Fumikado wanted to use the Eye of Senri when building the homunculus body for Taira no Masakado, implying that it may be an actual eye or pair of eyes that contains some sort of power.[2]

The Eye of Senri has a design showing a semicircle facing downwards, with a smaller black semicircle on top of the larger white one. A variation of the eye shows a full circle design instead, with the upper semicircle on top being white or black.