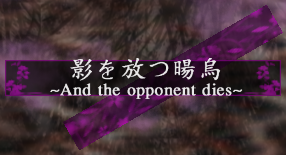 An example of a stage introduction, this being the Stage 6 of Evanescent Existence

A stage (面, Men) is a level in gameplay that contains obstacles, stage enemies, items, and the like. The player must pass a stage by defeating the boss at the end of each stage in order to proceed to the next stage or complete the game. Unlike other video games however, being a shoot 'em up based on the Touhou Project, the Len'en Project contains the gameplay of danmaku, dodging bullets as the obstacles. The stages each have a unique theme and may also contain a midboss within the stage.

The player does not have the ability to freely travel around a stage to see its scenery, being a shoot 'em up. Instead, they wait for stage enemies and bosses to approach and shoot bullets at the player for them to dodge. Usually, when a player defeats a boss of a stage, the text "STAGE CLEAR" will appear. The background of the stages are in 3D and thus plays through a path of some sort as the stage proceeds. Also, each stage is located at a location of some sort, and they're also given an actual title.

Usually, each Len'en game as a total of 6 stages with an Extra Stage.