From Len'en Wiki
Jump to navigation Jump to search
For the location where Kurohebi was encountered and fought, see Dimensional Cave.

A variety of interconnected spaces (空間, Kūkan)[1] were created by Tsurubami Senri in order to spirit away the cast of Evanescent Existence, and is a world created on the "border between Mugenri and the Outside World".[2] They are interconnected with corridors (回廊, Kairō) that no one but Tsurubami can use, which serves as their shortcuts between the spaces. One space appears per stage for each occupier (or boss) throughout the game, and are all specially designed according to the people they were meant to occupy. These spaces have since been discarded and no longer currently exist. All the humans that were spirited away to these spaces have now settled in Mugenri, as Tsurubami does not have the capability to send them back to the Outside World.[1] 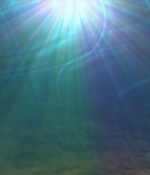 The Spacetime Whirlpool (時空の渦, Jikū no Uzu) was designed for Aoji Shitodo and could have been reached from the Dimensional Cave. It resembles an ocean from an underwater view, with sunlight shining through the surface and a sandy floor. Many of the stage's enemies also fire danmaku in the shape of a double helix or whirlpool, as Aoji does. The water in the space enabled Aoji to use their ability to create whirlpools of water effectively. 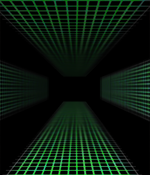 Not technically one of the spaces Tsurubami created, Stage 3 instead takes place in one of the corridors that connect all the spaces together[1]. Tsurubami used these as shortcuts in order to travel quickly between each location. While it is designed so that only they can use it[1], Yabusame Houlen was able to enter due to their dimension-crossing ability. It was here that Yabusame and Tsurubami first fought each other (although Yabusame thought they were Tsubakura Enraku). Despite the location's exclusivity to Tsurubami and Yabusame, stage enemies still appear here.

The corridor seen has bright green grid patterns on all four surfaces and which appear to change positions with one another. When entering or leaving the spaces, a square-shaped image of the location may phase in and out of view before disappearing altogether. It is unknown if the corridors still exist since no one else in Mugenri can use them. However, it may be speculated that it was Tsurubami's method of exiting Mugenri and into the Outside World. 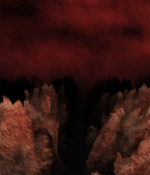 The space designed for Hooaka Shitodo contains many peak-shaped rocks. They first appear grey, but change into a red color as one proceeds, likely to reference Hooaka's ability of controlling hot and cold. The stage enemies often fire patterns in lined-up formations. The space's temperature fluctuates greatly from time to time, befitting Hooaka's ability to manipulate hot and cold.[3] If one ascends to a higher altitude, they may proceed into the next space. It is unclear whether the Spacetime Whirlpool would have lead to this space 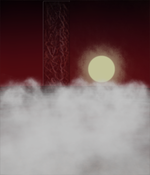 Officially titled the "Tower that Births the Sun, the Tower that Consumes the Sun" (陽を娩む塔餤らう塔, Yō wo Umu Tō Kurau Tō), the space designed for Kuroji Shitodo features a tower that appears to be high in elevation, surpassing even the clouds. From atop the tower, the dark sun leading to Mugenri can be seen in the distant sky. Later in the stage, it will hide behind the tower. If one flies towards it, they will arrive at the next space.

While it is unclear how the space is fit for Kuroji's ability, its title does reference Kuroji's ability to reverse front and back. The sun behind also turns from bright to black when Kuroji appears. 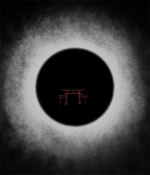 Extremely high in elevation, the Sun that Casts a Shadow (影を放つ太陽, Kage wo Hanatsu Taiyō) was designed for Clause and is where the entrance into the Shrine Road and subsequently Mugenri can be found. As one ascends to this space from the last, bands of a purple haze can be seen falling down the tower. The sky here is dark with the entrance resembling a solar eclipse and within the sun a torii can be seen. The space may have been a good fit for Clause to use their abilities, as stars are objects with strong amounts of gravity (in spite of it not being a star at all).