This article describes the overall gameplay and background information for Reactivate Majestical Imperial.

Reactivate Majestical Imperial plays much like a typical Touhou Project game in that the player character always faces the top of the screen, shooting at stage enemies, dodging through intricate bullet patterns and confronting challenging bosses at the end of each stage.

You start the game with either 3, 4, 2, or 5 bombs, depending on whether you pick Yabusame/Tsubakura, Yaorochi/Sukune, Kuroji/Saragimaru, or Suzumi/Suzumi, respectively. Extra bombs can be obtained by collecting green bomb items, which are dropped by certain enemies and midbosses. You can carry a maximum of 9 bombs. Dying will reset the amount of bombs to whatever you had when you started the game.

In this game, lives are represented by red stars. Extra lives can be obtained by collecting purple 1-up items dropped from certain enemies and midbosses. They are also awarded at 10, 20, 50, and 100 million points. You can have up to 10 lives.

Each passive character has a unique ability to distinguish themselves from each other:

Partners switch active and passive roles when a life is lost or a bomb or flash bomb is used. In the event of death, only the character who got hit loses power.

As spirit items are collected, the jar gradually fills up. At every multiple of 200, the team enters Jar Zenith Mode. The active character obtains a barrier that serves as an automatic deathbomb if you get hit and depending on the team, another perk is added for its duration:

Each instance of jar zenith mode lasts longer than the previous one. In the Extra stage, collecting 1000 spirits allows you to access the Extra+α stage.

The final boss of the game, Shion, introduces notably-different mechanics for their fight alone;

As of v1.10a, Reactivate Majestical Imperial has had 4 teams with 2 characters each to choose from: Yabusame Houlen with Tsubakura Enraku, Adagumo no Yaorochi with Sukune Katano, Kuroji Shitodo with Adagumo no Saragimaru, and, after being unlocked, Suzumi Kuzu (Hamee) with Suzumi Kuzu (Arde). Each has their own shot type and bombs, as well as different movement speeds. 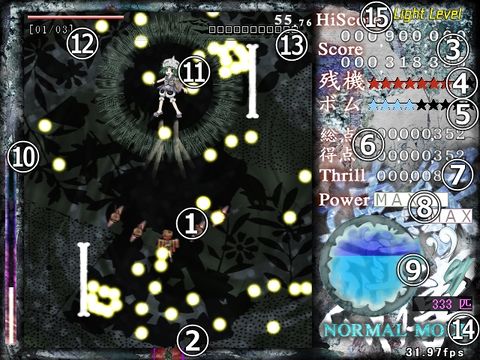