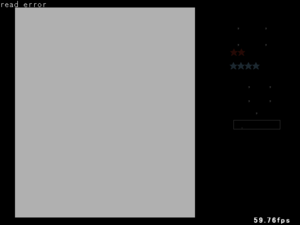 A glitch (グリッチ) or bug (バグ) is an unusual and unintended feature of any video game (or any computer system) that's not usually discovered until the game is released. They can range from the misuse of sprites to the game crashing. Most glitches in the games of the Len'en Project are caused by programming errors within the game's coding.

As JynX programs their games, they ought to be following the rules similar to the systems development life cycle, where they'll analyse the requirements, design the overall game, do the implementations, test all coding and maintain the game to fix any issues. At some point in this cycle, JynX would've missed out a bug that they didn't know existed and never tested it. If they do, or if someone reported the bug, they'll then jump back to a particular stage to reprogram and fix that bug, and release a new version of the game in a patch. Trial versions of a game may contain more glitches and bugs than their full released version.

When glitches occur, either something unusual will happen (such as randomly dying for no apparent reason) or the screen will freeze/crash, and even sometimes some random sprites will or will not appear. Glitches can also include incorrectly displayed graphics, collision detection errors, sound errors and other issues. Some only activate when the player presses a certain sequence of button commands. Glitches can either be helpful (i.e. cheating), trivial & no issue to gameplay, annoying, or a serious issue to a game that causes the data to corrupt. Glitches needn't be performed by just the player, but may also have script errors that happen by default (i.e. the player doesn't do anything out of the ordinary, but the scripts still tells the program show something unusual).

Outside sources can also cause glitches or bugs. Some glitches may occur due to damage to the original cartridge or CD, even if there are no errors in the game's programming. Utilities can also make unnatural glitches appear in the game that didn't originally existed.

Glitches can also extend to the compatibility of what system or operating system a Len'en game can play on. For example, there have been reports of Brilliant Pagoda or Haze Castle not running correctly on Windows 8.1.[1] Also, you can get a "read error" (as shown in the above image) if you place a Len'en game in a directory that contains non-Latin characters (e.g. "C:\連縁天影戦記\Le04.exe").