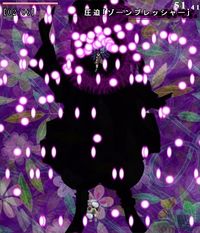 An example of danmaku used by Clause in Evanescent Existence

Danmaku (弾幕, lit. "bullet curtain" or "curtain fire"), also known as "Bullet Hell" in English, is a Japanese term for "barrage", as in a barrage of bullets. They are shoot 'em ups similar to regular shooting games, but focus more on weaving through complex patterns containing anywhere from dozens to hundreds of bullets; the genre is considered the hardest genre for a shoot 'em up.

The comparison often used is that bullets in traditional shooters are aimed at the player, fast, but relatively infrequent. Bullets in danmaku games tend to be slower, but much greater in numbers: depending on the attacks, enemy bullets can be scattered all over the screen, covering the major part of the playing field. They aren't necessarily aimed at the player, and can be aligned indiscriminately, or in movement-restrictive patterns. The patterns themselves can be intricate and complex, giving the barrage a beautiful, if deadly, nature. The danmaku genre has attracted many fans who enjoy either the inherent difficulty, the beauty of the enemy attacks, or both.

Since the Len'en Project takes inspiration from the Touhou Project, it's no surprise that Mugenri has a system similar to that of Gensokyo's. However, there are a few significant differences. Firstly, unlike Touhou, which uses the kanji fu (符, sign) in its spell card names, Len'en uses the kanji hai (牌, card) instead. Secondly, the difficulty and speed of the patterns are significantly harder than Touhou's, to the point where its patterns can be compared to the likes of the Seihou Project. Truth be told, since there are (technically) no spell card rules in Mugenri (unlike Touhou), there is a risk of death, but due to danmaku fights being a battle of wits more than anything, there is no sense of accomplishment in killing one's opponent in battle.