Wilhelm von Clausewitz Halcyon HISUIMARU (ヴィルヘルム・フォン・クラウゼヴィッツ・ハルシオン・翡翠丸, Viruherumu fon Kurauzevittsu Harushion Hisuimaru), often referred to as Clause (クラウゼ, Kurauze), is a delusional, yet powerful human originally from the Outside World who nobody likes due to them being a nuisance. Because they are considered an annoyance on a frequent basis, they could be treated as a joke character. They are currently working for Garaiya Ogata.

Not all that much is known about Clause. They are a very weird and eccentric person who somehow gained a lot of power because of their delusions.[1] They are regarded as an annoyance by everyone, even by JynX, making them sort of a joke character. They are the final boss of Evanescent Existence, the first game of the Len'en Project, as well as a possible final boss in Brilliant Pagoda or Haze Castle.

Despite their species being labelled as "annoyance", they are still thought to be a human. They hail from the Outside World and were taken into Mugenri by Tsurubami Senri. Clause was one of the candidates for the position of a shinto priest at the Senri Shrine, but they did not succeed in defeating Tsurubami. Because of Tsurubami's limitation on barrier control, they were not able to leave Mugenri,[2] and became a homeless wanderer on the verge of death after Evanescent Existence. Some time before Brilliant Pagoda or Haze Castle however, they were picked up by Garaiya Ogata and settled in at the Dragonfly Castle working for them.[3]

Clause is shown to be an arrogant, impulsive and peculiar person. They became even more eccentric upon entering Mugenri, and they talk on and on even though their knowledge is entirely superficial.[1] Most people treat them as a nuisance and hate Clause upon their first meeting. Their acquaintances from the Outside World, such as Yabusame Houlen or Tsubakura Enraku, outright dislike them and try to avoid them. Tsurubami Senri, Shion and Tenkai Zuifeng are some characters who similarly find them annoying them upon first meeting. Tsubakura calls it a "valuable talent", and Clause has come to describing themself as "heretical".[5]

Their dialogue consists of incredibly long-winded, structured sentences and generous usage of metaphors and quotation marks on some keywords. The words used in quotations can be ambiguous in meaning, so it is really troublesome for everyone to fully understand them. Most of their pseudo-philosophical ramblings are illogical and self-conceited. Even if one tries to insult Clause, they will take it as a compliment, insist that they are superior to everyone else and refuse to listen to other's advice. Clause even recognises that conversing with them is difficult.[5] Tsurubami's good ending in Evanescent Existence is the only time where Clause speaks normally.

Clause can control gravity and manipulate it at will. They did not have this ability, or any other ability, when they were in the Outside World, but they acquired this ability upon arriving in Mugenri,[2] eventually gaining a lot of power. It is because of their delusions that they have gained such great power, which is considered a total nuisance.[1] They can create black holes that can focus, grow, and decrease the gravity around an entire field. They can also force their opponent towards a certain direction, but only to a small extent.

In Evanescent Existence, they brag about how great their power is to fake Tsubakura to the point that they could destroy the Sun that Casts a Shadow. However, because they have acquired this ability only recently, they do not seem to be great at using it. In fact, they outright admitted it to Yabusame Houlen.[6] JynX considers Clause's ability to be the most useless and annoying one in the Len'en Project.[4]

Their real name is unknown, but they go by the bizarre fake name Wilhelm von Clausewitz Halcyon HISUIMARU (ヴィルヘルム・フォン・クラウゼヴィッツ・ハルシオン・翡翠丸); Clause (クラウゼ, Kurauze) is a short-form used by various characters such as Yabusame Houlen and Tsubakura Enraku. Their name was described to be long to the point where it's impossible to remember it. Nobody particularly cares whether it's their real name or not.[1] In-game, their name would appear as "(Omitted Start) Clause (Omitted End)" (（前略）クラウゼ（後略）, (Zenryaku) Kurauze (Kōryaku)), which is further joked in Brilliant Pagoda or Haze Castle, with the English translation being labelled "(Zenryaku)", meaning "Omitted".

JynX does not regret giving Clause such a long name, as it has a special meaning, but they consider it a pain to write.[4] They created a poll on Twitter about revealing some information about the Len'en Project, with one option being a reveal of Clause's real name. However, it was not voted for.

Wilhelm von Clausewitz can presumably be traced to Wilhelm Benedikt von Clausewitz, a prussian lieutenant general, or his more famous younger brother, Carl von Clausewitz. Carl von Clausewitz developed the concept of the center of gravity in military. His theory of war was presented in a way too abstract for most ordinary soldiers to follow, making them see only its surface meaning and not Clausewitz's true thoughts on the matter, and his dialectical method of constructing his argument leads to frequent modern misinterpretation due to exploring various (often opposed) ideas before reaching the conclusion. Although unknown if intentional, the "witz" part of the name can be interpreted as "joke" in German.

As for the rest of Clause's name, Halcyon is a genus of of the tree kingfishers. In HISUIMARU (翡翠丸, official romaji), the first two kanji literally mean "jade" (翡翠, hisui), meaning the color green or a type of gem. It could also mean "Kingfisher", once again referring to that type of bird. The kanji 丸 means "full" or "round", or even "-ship" if treated as a suffix. The middle dots (・) in their name are used in foreign names to show where the next word begins.

Whether Clause really is a bearer of a Bird's Name or simply named themself after a bird is unknown.

Clause has long purple hair and purple eyes. They wear brown baggy pants and a purple trench coat with a blue capelet. Their shirt is purple with a white necktie and they have bandages on their ankles. Their right pant features three dots and their left pant features a squiggle, which is based on the concept of Wave-particle duality

In their Brilliant Pagoda or Haze Castle appearance, they are holding a pink and purple neutron or atomic model. 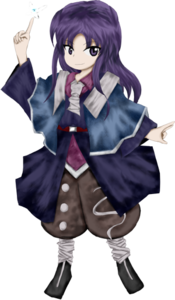 Clause is the final boss, and the Extra stage midboss, of Evanescent Existence. The priest Tsurubami Senri spirited away Tsubakura Enraku, Aoji Shitodo, Hooaka Shitodo, Kuroji Shitodo, Kurohebi, as well as Clause to the land of Mugenri, placing them in different spaces to train their newfound abilities. Clause was the first to find a way to escape, arriving to the "sun that casts a shadow", which is a portal to the Senri Shrine. Clause believes the black sun to be a star and that they will gain power from it.

The priest Tsurubami Senri, disguised as Tsubakura Enraku, travelled across various spaces to test the outsider's abilities. Disappointed with most of the opponents, they ended up deciding on going to a portal connected to their shrine, which appeared to everyone else as a "sun that casts a shadow". However, Clause has reached it first, where Tsurubami find them an annoyance immediately. Whilst speaking long-windedly, Clause somehow came to the conclusion that they were the "chosen ones". Still thinking they were talking to Tsubakura, Clause wanted to test their powers with a danmaku battle and to "break the curse of the star". They also stated that they would go easy. However, Tsurubami ignored Clause's strange way of talking and metaphors, and proceeded to fight them. Clause casts five different spell cards, but was eventually defeated.

After that in the good ending, Clause wondered where "Tsubakura" got their power from, to which Tsurubami revealed that they disguised themself as Tsubakura. Clause was the first to realise that this Tsubakura was fake, and they praised themself, claiming that they knew all along that they were not fighting with the real Tsubakura. They had a triumphant look on their tattered face, and they called Tsurubami a "monster". For the most part however, a clearly annoyed Tsurubami ignored them whilst doing their own thing – all while Clause was muttering to themself – and they left for the star. Clause then had a sense of loneliness.

A while after being defeated by Tsurubami, Clause ended up encountering Yabusame Houlen in the same location. Yabusame did not want to talk to Clause, but Clause ended up rambling about their ability, trying to explain to Yabusame why they lost to "Tsubakura". They insisted that they were not really trying with their full power. Annoyed with Clause's strange words and metaphors, Yabusame and Clause settled it on a danmaku battle. Clause cast the same five set of spell cards, but they were defeated again. In the good ending, Clause could be seem lying defeated in the distance as Yabusame make their way across the black sun.

Clause returned in the Extra Stage for one final battle on the Shrine Road to the Senri Shrine. They started with meeting the real Tsubakura, thanking them for their "help" at an earlier point, stating that they have to pay back something they "owe" to Clause. However, Tsubakura told them not to bother and to "go back to the hospital", leading to Clause to cast three spell cards for only to be defeated again. A while after, they meet Yabusame again, talking about not being an "adult" to meet an end in an unsightly way. Yabusame jokes with them until Clause makes them get "serious", casting the same three spell cards, only to get defeated again.

After a few years of absence, Clause returns as one of the eight final bosses on the Neutral route of Brilliant Pagoda or Haze Castle. They were first revealed to be in the game from a Twitter post on 13 February 2016, months before the game's full release. In order to encounter them, the player must reach stage 6:-4, meaning that they have to take the Haze route for most of the game. They could also be encountered randomly on stage 6:0 if Suzumi Kuzu hasn't been unlocked yet, as well as stages 6:-2, 6:-3, 6:1, 6:2 and 6:3.

After Evanescent Existence, Clause became a homeless wanderer. While on the verge of death, they were picked up by Garaiya Ogata. Clause ended up working for them and are therefore sided with the Dragonfly Army.

In every scenario, they present a picture of Taira no Fumikado, asking if they have been seen anywhere (even asking Fumikado themself). This is because they have been tasked to retrieve them, either by Garaiya or Chouki. The protagonists say they have seen Fumikado (likely referencing their encounter on Stage 5), but they do not know where they are. This eventually leads to a battle because Clause does not believe them.

Clause has trouble getting a good reputation with most people they encounter. Thus far, all characters that have met Clause have found them to be an annoyance.

It is shown that Clause is acquainted with Yabusame and Tsubakura, but not much is known in detail. They claim that they've known each other for a long time.[5] Yabusame despises Clause even more than Suzumi Kuzu[5] and treats them with contempt because of their habit of being long-winded.

Garaiya saved Clause and took them under their wing when the latter became a homeless wanderer. In exchange, Clause now works for them. Garaiya thinks they're annoying, as well.[3]

While not confirmed, when asked about Tenkai's relationship with Clause, JynX dodged the question much more strongly than usual, implying that there's a link between the two.[7] There are a scant few subtle connections between the two lending credence to theories about the subject: