A World That Isn't Fantasy

The album comes in two parts, "Frontside" and "Backside", containing all tracks from Evanescent Existence, plus new and unused tracks. The album is currently available for digital sale at BOOTH, with Frontside and Backside sold separately at ¥1500 each. It also comes with a 20-page booklet for each CD, 40 pages in total, containing a short story as well as character profiles, co-written by Rei and Zelo.[1] On 10 April 2019, the album was made available on Bandcamp, again separately as Frontside and Backside.

According to JynX, a physical CD was not made[2] due to a lack of funds,[3] but if the downloads sell well, they will make physical CDs.[4] Sales went reasonably well, which leads to this being possible.[5]

Sometime prior to 10th November 2018, Haru came across Trick Nostalgie's YouTube videos and took note of how Tsubakura Enraku and other people that went missing in the Modern Spiriting Away were in the "games" shown off in its videos, as well as how similar Rei is to an AI once developed at the research facility Hoojiro Shitodo works at. On 10th November, she set up Twitter accounts for both herself and Hoojiro, such that they may view and interact with Rei on the platform. Hoojiro agreed with Haru on how similar Rei is to the AI, and added that the technology should have been frozen and even its data died out, casting suspicion on whoever used to work on the AI as the culprit(s) behind Rei's appearance.

Rei directly contacted the two on the platform, claiming to know of their activities on the Wings of Magritte through the train's internal backup, and asked to learn about their activities at the time elsewhere. Haru and Hoojiro seemed to comply, but the conversation moved on to direct messages, and the rest of their conversation remains unknown. The next day, on the Len'en Project's 5th anniversary (11 November 2018), Rei and Zelo revealed in the "Len'en Project 5th Anniversary Video!" video that the A World That Isn't Fantasy album had begun production, and that the two monochroids have been helping with writing its booklet.

On the 30th and 31st of March 2019, Haru and Hoojiro resurfaced on Twitter, talking about "something" that they both received recently. Haru commented that "to see what we have done through the interpretation of a third party is a peculiar feeling", which points to what they received being a copy of the album, and that Haru was commenting on the fact that Rei and Zelo wrote the booklet based on the information they learnt from the Magritte's backups and their conversations on Twitter with Haru and Hoojiro. The next day, on 1 April 2019, the album was publicly released.

Both the Frontside and Backside booklets have the same structure, similar sections are grouped together for ease of reading.

On 10 April 2019, JynX released transcriptions of the booklets for free, allowing places such as this wiki to publicly translate them.[6] The raw data can be found on JynX's website. 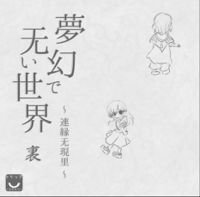 Unlike the games, the tracks in the album lack the comments from JynX typically found in the Music Room sections. Instead, JynX posted comments on the new and arranged tracks in several Pixiv FANBOX posts, from 15 December 2019 to 2 February 2020. Alongside each post, JynX released a related music file as a donors-only reward.